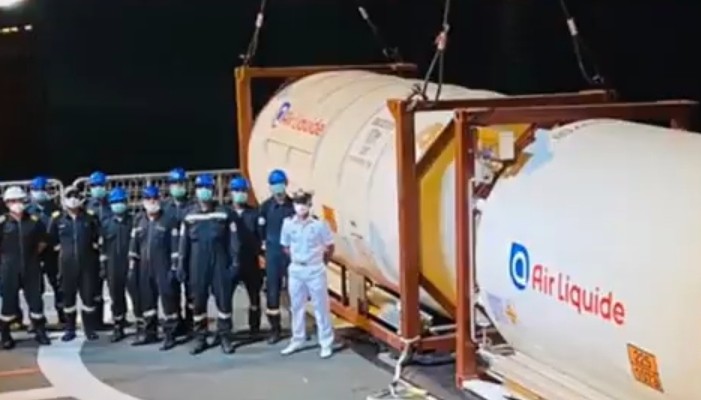 Catering to the needs of uninterrupted supply of oxygen in many Indian hospitals, an oxygen bridge coordinated by India and France and supported by Qatar has so far delivered 80 tonnes of oxygen and more is underway.

French Ambassador to India, Emmanuel Lenain took to Twitter on Monday and posted a graphic image of the ‘Oxygen Solidarity Bridge’ coordinated with oxygen from French multinational Air Liquide.

“Watch how the France-India-Qatar #OxygenBridge works. Coordinated by France and India, with O2 donated by @airliquidegroup, support from #Qatar and transport by @IndianNavy and @IAF_MCC. This bridge has already delivered 80 tons of O2 to Indian hospitals, and more is underway,” Lenain tweeted on 17 May.

Oxygen donated by the French multinational Air Liquide is filled in oxygen tankers in Qatar and shipped by the Indian Navy for distribution to hospitals in India. The empty cylinders are then flown back to Qatar for refilling.

So far, India has received oxygen totalling 80 tonnes in two phases of 40 tonnes each on May 10 and 12 respectively.

Ministry of External Affairs Spokesperson, Arindam Bagchi had on May 13 acknowledged the receipt of 2 ISO containers which had reached Kasturba Hospital in Mumbai and recounted the journey of the containers reaching India.

A video with Bagchi’s post tracing the journey showed INS Trikand completing loading the 2 ISO containers at Hamad Port in Qatar under Operation Samurda Setu-II of the Indian Navy.

The containers on board the ship reached Naval Dockyard in Mumbai and were transported to the Air Liquide facility in Pune. They were finally delivered to Kasturba Hospital in Mumbai.