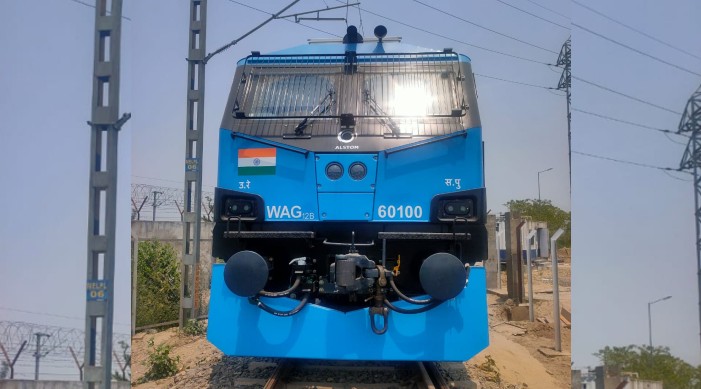 The locomotive with twin Bo-Bo design having 22.5 Tonnes axle load is upgradable to 25 Tonnes with design speed of 120 kmph

Indian Railways has added another feather in its cap with the induction of the 100th 12000 HP WAG 12 B in its growing fleet of modern and high speed locomotives.

Built in one of India’s largest integrated greenfield manufacturing facilities in Madhepura in Bihar, 12000 HP WAG 12 B locomotives are the country’s most powerful ‘Made-In-India’ electric locomotives.

According to a statement from the Ministry of Railways, these locomotives are state of the art IGBT based, 3 phase drive and 12000 horsepower electric engines.

These high horsepower locomotives will help to decongest the saturated tracks by improving average speed and loading capacity of freight trains.

These locomotives are capable of a maximum tractive effort of 706 kN, which is capable of starting and running a 6000 T train in the gradient of 1 in 150. The locomotive with twin Bo-Bo design having 22.5 Tonnes axle load is upgradable to 25 Tonnes with design speed of 120 kmph.

These superior electric locomotives built under the ‘Make-in-India’ initiative, are playing a key role in revolutionizing the freight movement in the country. It will help to decongest the saturated tracks by allowing faster, safer and heavier freight trains to move across the country, as well as improve the loading capacity.

“So far, these e-Locos have traversed across all railway divisions and are performing well. We look forward to more such delivery milestones,” the Ministry of Railways said.

These locomotives are proving to be a game changer for further movement of coal trains for the Dedicated Freight Corridor.

The locomotives can be tracked through GPS for its strategic use through embedded software and antennae being lifted through the servers on ground through microwave link.

These WAG 12B e-Locos have already clocked over 4.8 million km hauling a wide range of commodities across 17 States and 2 Union Territories.

First 12000 HP Made in India Locomotive, manufactured by Madhepura Electric Loco Factory situated in Bihar, was put into operation by Indian Railways from Pt Deen Dayal Upadhyaya Jn Station on May 18,2020.