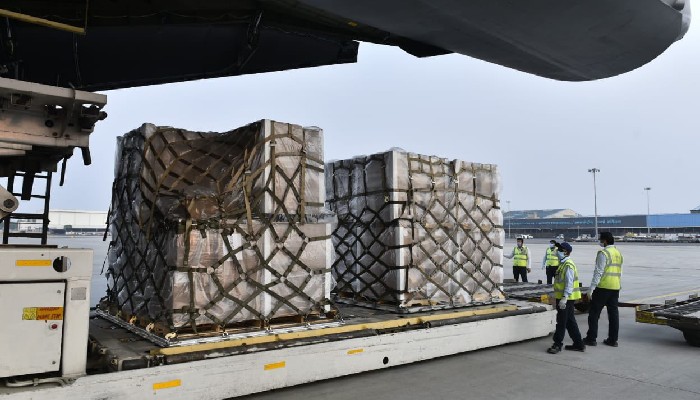 Consignment of medical supplies at the Delhi airport

CNN and other western media houses have been known for their anti-India stance; they do so keeping journalistic ethics at bay

The article ‘The world sent India millions in Covid-19 aid. Why is it not reaching those who need it most?’ published by CNN makes false accusations and draws incorrect conclusions about the distribution of foreign relief and aid that are being flown into India.

Stating that planeloads of ventilators, oxygen supplies and antiviral drugs have begun arriving at the Delhi airport since the last week, the article claims that much of the cargo remained at the airport hangars even as hospitals on the ground pleaded for more provisions.

Such prejudiced and unsubstantiated claims of the US-based news outlet, have been contradicted by the Indian government.

The Ministry of Health and Family Welfare on May 4 has already come out with the clarification, stating that “streamlined and systematic mechanism for allocation of the support supplies received by India has been put into place, for effective distribution of the medical and other relief and support material.”

It has added, “The Indian Customs is sensitive to the need for availability of COVID related imports including Oxygen & Oxygen related equipment etc, and are working 24 X 7 to fast track and clear the goods on arrival and lead to expeditious clearance within hours.”

However, the CNN piece ignoring the measures put in place by the Indian government, has blamed “unnecessary bureaucracy, human error, or time-consuming protocol,” as reasons for the delay.

But the fact is that the Indian government has been quick in establishing clearance mechanism for aids arriving from across the world.

Steps taken for expeditious clearance on fast track basis are as follows:

The Goods are given high Priority for clearance by the Customs Systems for processing over other goods.

Nodal Officers also get alerts on email for monitoring and clearance.

Monitoring by senior officers for the pendency of COVID-related imports is also being undertaken.

The Handholding to the trade is given for complying with the requirements beforehand.

Outreach activities and Helpdesk enables Trade to get the goods cleared on arrival.

In addition to faster clearance:

When imported free of cost and distributed freely, based on the state govt. certification, IGST is also waived.

Further, for the import of oxygen concentrators for personal use, IGST has been reduced from 28% to 12%

A cell was created in the Ministry under Additional Secretary [Health], MoHFW to coordinate the receipt and allocation of foreign COVID relief material as grants, aid and donations.

All this belies the CNN article’s claims that the government did not have protocols in place before receiving the aid, and had to quickly cobble together guidelines on allocation and coordination.

It claims that it took the government seven days to create a mechanism to distribute supplies to states. Refuting the claims, the Ministry of Health and Family Welfare has stated that though the SOP for allocations was issued on May 2, allocation and distribution to States and UTs through Central and other health institutions started immediately as the global community started to support the Government of India efforts for fighting the global pandemic.

This official statement had also noted that the Coordination Cell under Addl. Secretary [Health] was created in the Health Ministry on April 26, 2021 and started work instantly. Hence, the claim that there was a delay is factually incorrect.

Going further, the CNN article fans a rumor that oxygen concentrators are piling up at warehouse for want of clearance from Custom authorities.

This has been termed “totally incorrect, not based on facts and without any basis,” by the Central government.

According to the official statement, the Central Board of Indirect Taxes and Customs (CBIC) has clarified that there is no such pendency with Indian Customs. The Indian Customs is swiftly clearing all consignments and no such figures of pendency exist across any port of import.

“In all, 3000 oxygen concentrators have been received from various countries as global aid to support efforts of the Government of India and the States and UTs in their collective fight against the global pandemic,” the statement issued by the Ministry of Health and Family Welfare said.

The statement has also given the number of consignments of oxygen concentrators received from the respective countries and are either delivered to the identified tertiary care institutions, or been dispatched for delivery. The relief material has been dispatched through road and air too.

“There are no oxygen contractors lying in the warehouse of the Customs Department,” officials have said.