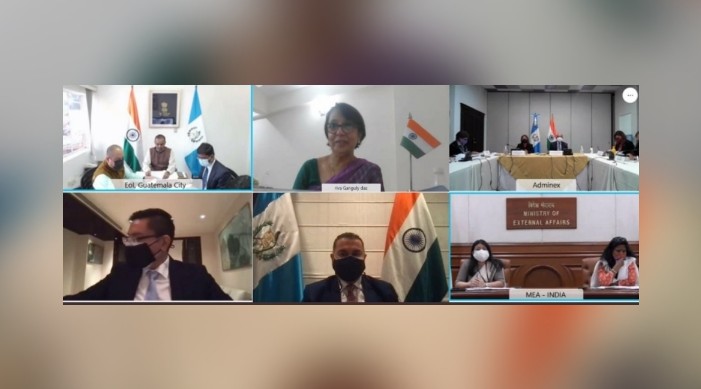 The India-Guatemala Foreign Office Consultations being held in a virtual format.

Global cooperation and solidarity are key to fighting the Covid-19 pandemic and achieving economic recovery, India and Guatemala have emphasized.

During the 2nd Foreign Office Consultations (FOC) between the two countries held virtually on Wednesday, the Guatemalan side appreciated India’s role in extending assistance to Guatemala and other countries in the LAC region over the last year, including through the supply of pharmaceuticals and vaccines.

They also discussed the possibilities of expanding cooperation in the fields of agriculture, science and technology, space, energy, education, health and traditional medicine and tourism, the Ministry of External Affairs (MEA) said in a press release after the talks.

The two sides acknowledged that trade is an important pillar of India-Guatemala relations and expressed satisfaction at the growing trade which reached US$ 314.27 million in 2019-2020, with Indian exports at US$ 291.32 million and imports at US$ 22.95 million.

Both sides agreed that there was great potential to further expand their trade relationship.

During the talks, India and Guatemala noted their warm and traditionally friendly relations and comprehensively reviewed the current status of bilateral relations in all fields including political, economic, cultural, trade and consular.

According to the MEA, the two sides also exchanged views on regional and international issues of common interest and agreed to strengthen their cooperation in the multilateral arena.

They acknowledged the strong institutional bond between India and SICA (the Central American Integration System) and agreed to explore holding the next India-SICA Foreign Ministers’ Meeting at a mutually convenient date.