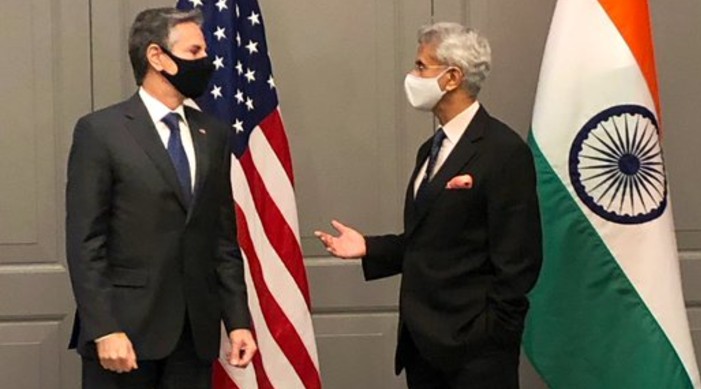 EAM S Jaishankar with US Secretary of State Tony Blinken

External Affairs Minister S Jaishankar, who is on a four-day visit to the UK to attend the G-7 Foreign Ministers’ meeting, on Monday held first in person meeting with US Secretary of State Tony Blinken.

Known to each other fairly well, S Jaishankar and Tony Blinken have worked closely together in their previous capacities.

According to sources, the two Ministers exchanged views on the Indo-Pacific strategic landscape. Conversation brought out the convergence of interests. Ministers reviewed the progress in practical cooperation in recent months.

Their discussion also covered the agenda before UNSC and other multilateral organisations and they agreed to work together in their mutual interests.

As per sources, in depth discussions were also held between the two sides on Covid-19 related challenge and the immediate requirements of India.

“Ministers discussed how greater Indian vaccine production can address both India's own needs and the requirement of global public health. India and the US will collaborate bilaterally, in Quad format and through multilateral initiatives,” people familiar with the development said.

Secretary of State Blinken assured the EAM that the US was monitoring developments closely and would respond positively to any Indian requirements. Next shipment from US will be landing soon. Oxygen and related equipment will continue to be key priority. The US has also acted on India's request for more Remdesvir.

Both sides noted that climate action and clean energy can be areas of cooperation. Early operationalization of the 2030 Clean Energy Agenda was important.

They looked forward at a further conversation at the G7 plus Guests meeting starting on Tuesday.