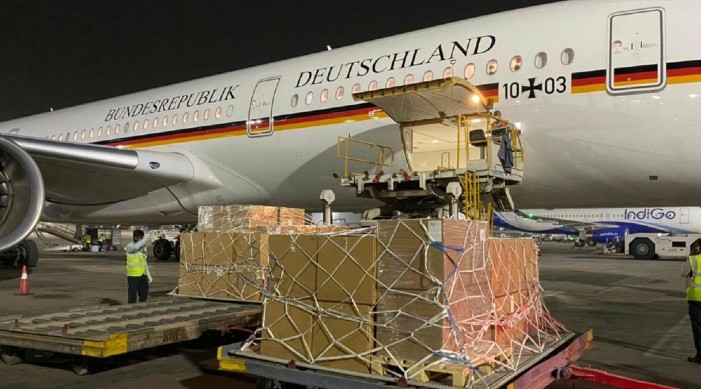 A consignment of ventilators arrives from Germany.

Continuing with the expression of solidarity and support to India from different quarters of the globe, France, Germany, Belgium and Uzbekistan have sent Covid-19 medical supplies to help New Delhi tide over the crisis.

On Sunday, India received 28 tonnes of medical equipment from France, 120 ventilators from Germany, 9000 vials of Remdesivir from Belgium and 100 oxygen concentrators and other medical supplies from Uzbekistan.

In separate tweets, Ministry of External Affairs (MEA) Spokesperson Arindam Bagchi acknowledged the receipt of each of these consignments from the respective countries.

Terming France’s supply of 28 tonnes of medical equipment including 8 hospital-level oxygen generators as a ‘testament to India-France strategic partnership and friendship’, Bagchi conveyed New Delhi’s appreciation for the support from France.

“A testament to India-France strategic partnership & friendship! 28 tonnes of medical equipment including 8 hospital-level oxygen generators and other medical supplies arrives from France. Deeply appreciate the support from France. Will bolster our oxygen capacities,” said the MEA Spokesperson in the tweet.

Acknowledging the gift of 120 ventilators from Germany calling the latter as India’s trusted partner and friend, Bagchi, expressed gratitude for the gift.

“Collaborating with our trusted partner & friend Germany to address this global pandemic. Grateful to Germany for gift of 120 ventilators,” he tweeted.

Appreciating the gift of 100 oxygen concentrators and other medical supplies from Uzebkistan, the MEA Spokesperson said this gesture has further deepened India-Uzbekistan strategic partnership.

“Further deepening our strategic partnership. Appreciate gift of 100 oxygen concentrators & other medical supplies from Uzbekistan. A special thanks to the Indian community in for their kind & generous donation of another 51 oxygen concentrators,” he said in the tweet.


Earlier, Indian Foreign Secretary Harsh Vardhan Shringla had in a special media briefing on Thursday said over 40 countries had come forward to offer assistance to India to help in view of the unprecedented situation.

He had said the government had been majorly focusing on procuring oxygen generators, concentrators, oxygen cylinders, cryogenic tankers as well as liquid oxygen.

On Saturday, the US had dispatched the third set of its several emergency Covid-19 relief shipments to India. The first and second consignments of emergency Covid-19 aid, including hundreds of oxygen cylinders and regulators, sent by the US landed in India on Friday.

In addition to the 120 ventilators of the model PrismaVent that were received by India from Germany on 1 May, also expected from that country is a mobile oxygen production and filling plant and a consignment of Remdesivir and monoclonal.

A German agency has also said that they would organize a webinar on virus sequencing with the Indian technical team.