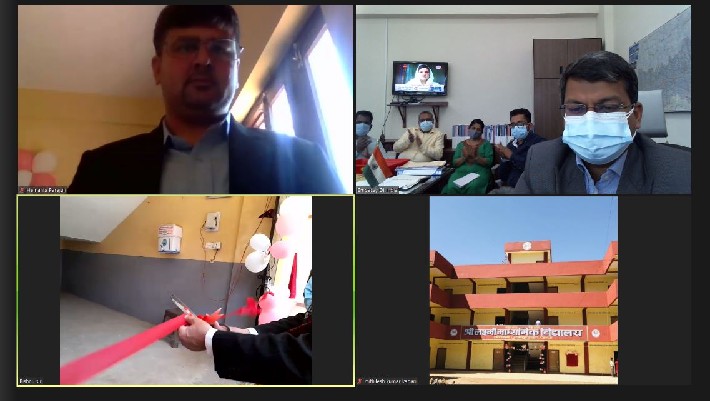 Schools were built with the Government of India's financial assistance of NR 98.37 million

In addition to above the Embassy of India has gifted 12 ambulances and 2 buses to various health posts, NGO and educational institute in Palpa District.

The newly built infrastructures are expected to boost the learning environment of students, said the Indian Embassy.

India’s grant of NR 32.17 million, under ‘Nepal-Bharat Development Cooperation’, was utilized for construction of three-storied building of the Shree Rambha Higher Secondary School including 17 classrooms, one room each for seminar, computer, principal, account, staff, lab and research, sanitation facility for boys and girls, compound wall and furniture.

The grant of NR. 41.36 million was utilized for the Shree Laxmi Higher Secondary School, was utilized for the construction of a two storied school building, including 8 classrooms, 2 office-rooms, 2 teachers room, separate sanitation facility for boys and girls and a 22 bedded hostel building, including common room, toilet block, water tank and furniture.

For the third school, Shree Nava Adarsha Multiple Campus was established in 2006 at Deurali in Palpa District and affiliated with Tribhuvan University, Kathmandu, New Delhi’s grant of NR 24.84 million were utilized for the construction of a two storied campus building, including 13 classrooms, one room each for library, laboratory, computer, campus chief, accounts and teachers, furniture & office equipment and sanitation facilities for boys and girls.

The construction work of all the three schools was monitored by the District Coordination Committee, Palpa.