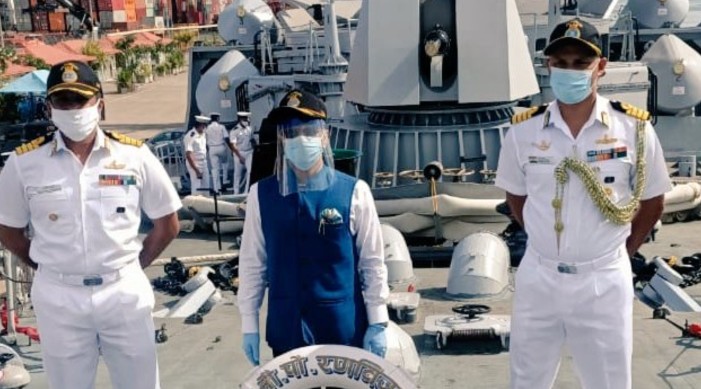 Indian High Commissioner Gopal Baglay on board INS Ranvijay, which made a visit to the Colombo Port

India and Sri Lanka have been close partners in maritime security

Adding a new thrust to ongoing maritime security cooperation between India and Sri Lanka, Indian Navy’s INS Ranvijay, a Rajput-class destroyer, has arrived in the island country on a three-day goodwill visit.

In a tweet, the Indian High Commissioner said, “Proud to visit #INSRanvijay, during her friendly call at #Colombo after over 4 months at sea.The visit marks another step in close #maritime security cooperation between #India and #SriLanka and their Navies.”

INS Ranvijay is in Columbo between April 14 and April 16, as part of the efforts to develop close maritime and security cooperation between the two friendly and close neighbors.

The arrival of the Indian Naval ship to Colombo brings in the message of solidarity and harmony for the people of Sri Lanka on the auspicious occasion of ‘Avurudu’, the Sinhala and Tamil New Year, the Indian High Commission said.

“India and Sri Lanka have traditionally shared close cooperation in defence and security. Their Navies have been actively engaged in mutually beneficial cooperation in training and capacity building. The visit of the Ship is another step in developing close maritime and security cooperation between the two friendly & close neighbours,” the High Commission said.

INS Ranvijay, the fifth of the Rajput Class Destroyer, is the Anti-Submarine Warfare capable Guided Missile Destroyer is equipped with the state-of-the-art indigenous Brahmos supersonic missile, according to a statement.

A trilateral meeting between India, Sri Lanka and Maldives was held in November 2020, as part of efforts by the three countries to expand maritime security cooperation in the Indian Ocean.

The meeting was held against the backdrop of the Chinese People’s Liberation Army Navy’s growing presence in the Indian Ocean and its efforts to step up defence linkages with smaller countries in the region, as well as the India-China border standoff.