Meetings with US Special Envoy for Climate John Kerry were 'very productive': MEA 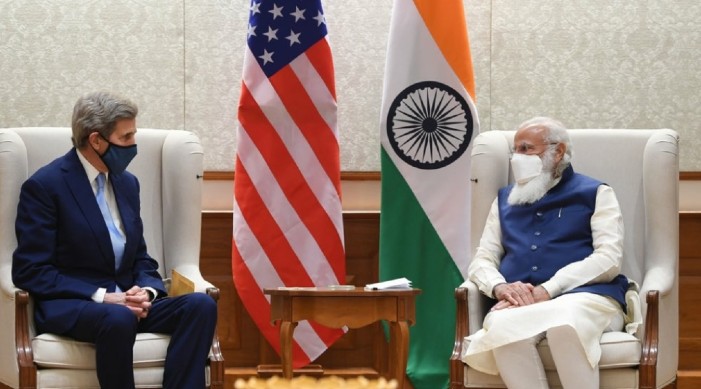 The meetings with US Special Envoy for Climate John Kerry were "very productive," the Ministry of External Affairs has said.

“Both sides discussed the global challenge of climate change in the context of several multilateral events later this year leading up to Cop 26 summit in Glasgow. Special envoy Kerry appreciated Prime Minister Narendra Modi’s vision and global leadership in climate action, especially our ambitious target of 450 GW of renewable energy by the year 2030," Ministry of External Affairs official spokesperson Arindam Bagchi said during a press briefing on Thursday.

Bagchi added that both sides discussed the need for supportive climate action by all countries in line with their respective circumstances.

“Given our complementary strengths, Prime Minister and Special Envoy Kerry agreed to collaborate on a 2030 agenda with focus on clean and green energy through enhancing availability of climate finance, building resilient infrastructure, energy storage and green hydrogen,” he said.

During the meeting, the Indian side briefed Kerry about the country's wide ranging efforts to meet commitments under the Paris agreement, efforts to reduce emissions and India’s lead in multilateral initiatives such as the international solar alliance and the collation of the disaster resilient infrastructure.

Special Envoy Kerry’s visit came in the run up to the Leader’s summit on Climate, which will be held virtually and which will be convened on April 22 and April 23. At the invitation of US President Joe Biden, PM Modi will participate in the summit along with other world leaders.