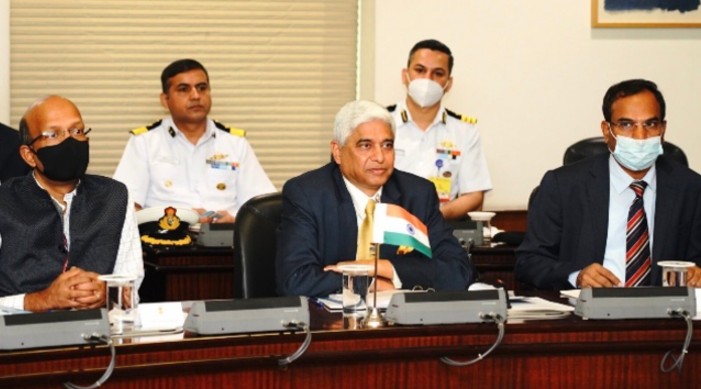 Secretary (West)Vikas Swarup, sitting in the middle, led the Indian delegation at JWG meet on counter terrorism on April 8

Reviewing existing threats, India and Maldives have emphasised the need for concerted action against all terrorist networks

India and Maldives have strongly condemned terrorism in all its forms and manifestations including cross-border terrorism and emphasised the need for strengthening international cooperation to combat terrorism in a comprehensive and sustained manner.

In their joint press statement issued after the first meeting of joint working group on counter terrorism, countering violent extremism and de-radicalisation on Thursday, they underlined the urgent need for all countries to take immediate, sustained, verifiable and irreversible action to ensure that no territory under their control is used for terrorist attacks on others and to expeditiously bring to justice the perpetrators of such attacks.

Both sides reviewed threats posed by terrorist entities that are under UN sanctions and emphasised the need for concerted action against all terrorist networks.

The meeting was held in a cordial and constructive atmosphere that symbolises the time-tested and good neighbourly ties between India and the Maldives and the energy, ambition and scale acquired by our bilateral relations under the leadership of Prime Minister Narendra Modi and President Ibrahim Mohamed Solih.

Referring to the joint statement issued during the state visit of Prime Minister Modi to the Maldives in June 2019, the two sides recognized the critical threats that terrorism, violent extremism and radicalisation pose to peace and security in the region.

India appreciated the clear-eyed stance taken by the Government of President Solih to counter such threats and the concrete steps taken by the Maldives in this regard.

The two sides also exchanged views on various areas of cooperation in the sphere of counter-terrorism including countering radicalization and violent extremism, combating financing of terrorism, preventing exploitation of the internet for terrorism and violent extremism, information sharing, capacity building and establishing institutional linkages between police, security forces, customs, immigration and other relevant agencies.

Further, the two sides exchanged views on enhancing bilateral cooperation against narcotics and drug trafficking. The discussions were also informed by the challenges that the COVID-19 pandemic has presented to countering terrorism, radicalisation and violent extremism.

Both sides agreed to strengthen cooperation that will include assistance and capacity building for the security and law enforcement agencies and other relevant agencies of the Maldives as well as collaboration and the exchange of best practices in the areas of counter-terrorism, preventing and countering of violent extremism and de-radicalisation. The two sides also discussed cooperation in multilateral fora.

The Maldivian delegation will also visit the training facilities of the National Security Guard and the Bureau of Police Research and Development during its stay in New Delhi.