India and Netherlands agree to strengthen cooperation on trade and investment 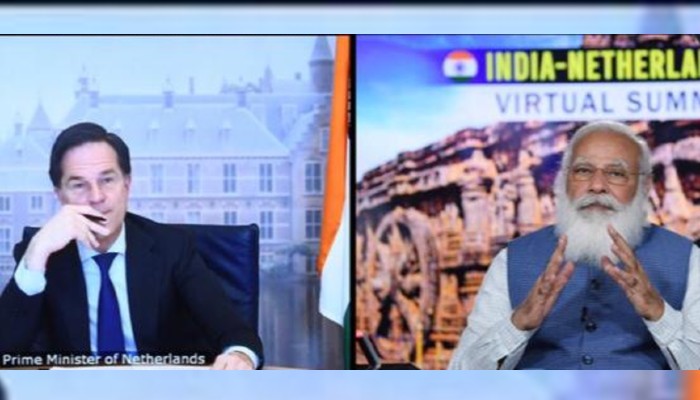 Prime Minister Narendra Modi on Friday held a virtual summit with his Dutch counterpart Mark Rutte and held an in-depth exchange of views on bilateral, regional and global issues of mutual interest.

This was the first high-level interaction between the two countries since the visit of the King and the Queen of the Netherlands in October 2019.

On trade and investment front, the two leaders noted the success of the digital Trade Mission between India and the Netherlands that took place virtually from February 8 to 12, 2021. They welcomed the three specific domains of the trade mission: water management (water safety and security), food chains (solutions in food waste, horticulture, dairy and aqua culture) and sustainable energy (solar energy, hydrogen, biofuels and energy transition).

As per the joint statement issued after the summit, both Prime Ministers agreed that the ambitious and innovative flagship programs like Clean India, Digital India, Make in India, Sagarmala, ‘Ayushman Bharat’ (healthcare) or Startup India have provided immense opportunities for Indo-Dutch collaboration in multiple sectors.

The Indian side apprised the Dutch side of the recently launched Production Linked Incentive (PLI) schemes and invited increased investments by the Dutch companies in areas of medical devices, telecom and networking equipment, solar PV cells, food and textile products.

Both leaders expressed satisfaction that despite Covid19 related constraints, the investment flows between the two countries continued to rise making the Netherlands the 3rd largest FDI investor in India and India the fourth largest FDI investor in the Netherlands in the year 2019-20. They welcomed the joint announcement on setting up a bilateral Fast Track Mechanism for investment facilitation and issue resolution.

They also acknowledged the progress made by the Start UP Link initiative (DPIIT, Invest India, Startup India and the Netherlands Embassy) and the intention to continue the successful collaboration including in medtech, agritech and cyber security as priority sectors.