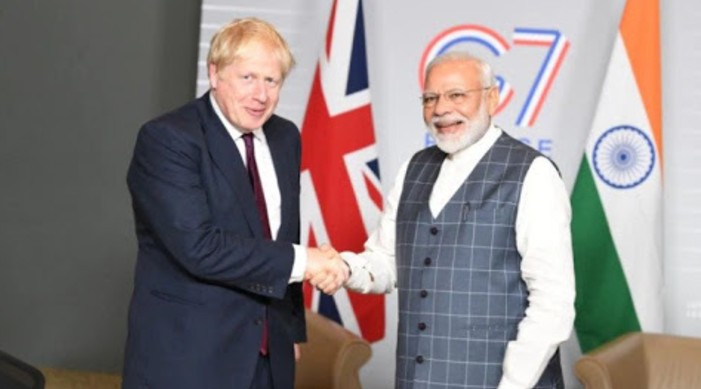 To give strategic orientation to PM Johnson’s visit to India, Britain has also scheduled a visit by its Chief of Defence Staff to New Delhi

The scheduled visit of British Prime Minister Boris Johnson to India in late April is drawing the attention of British strategic and economic community as Britain places India high on the priority list of countries with whom it would like to widen and strengthen its partnership in the post BREXIT and post Covid-19 era.

Even before the BREXIT and the worldwide spread of Covid-19 virus, British foreign policy mandarins had decided to re-engage with India, which is now increasingly being described as a rising superpower in British media and strategic community.

As is well known, Prime Minister Johnson had to cancel his visit to India late January this year due to Covid and in the midst of this pandemic again his decision to hold a summit with Prime Minister Narendra Modi, is very significant, as India also looks to reset its relations with Britain, in the light of evolving construct of Indo-Pacific.

To give strategic orientation to PM Johnson’s visit to India, Britain has also scheduled the visit of its Chief of Defence Staff to New Delhi. He will be interacting with top Indian defence hierarchy just two days prior to Johnson’s visit.

In the backdrop of the story of a rising India and an aggressive China, the UK strategic community is deliberating, how long the UK can alienate India.

After BREXIT, the UK needs a strong Asian power as a partner, friend and as an ally. This is why, respecting India’s prowess, Boris Johnson decided to invite India for the upcoming June summit of a powerful G-7 group.

Before this very significant multilateral engagement of seven powerful leaders of the world, Boris Johnson has planned his bilateral rendezvous with Indian political and economic leaders. As Britain separates its umbilical cord with the 27- nation European Union, the country needs to separately engage with the leading democratic and economic powers of the world.

The visit of PM Johnson is happening after last Prime Minister Theresa May’s visit in late 2016, a long gap of almost five years. Hence, Johnson’s declared intent to visit India was the need of the hour.

Britain very well realizes how important is India for British economy, as India has retained its slot as second largest foreign investor in the UK for several years , whereas Britain ranks 18th largest trading partner for India and third largest investor, after Mauritius and Singapore.

Hence, both the countries are keen on strengthening their economic and trade relations, for which the two countries intend to sign a new trade pact. Boris Johnson’s forthcoming visit to India would be first major international visit after Britain finally left the European Union.

The UK Prime Minister has already said, “How critical India is for its economy and security”. During the January visit of British Foreign Secretary Dominic Raab, the two countries have already decided to focus on five themes for a 10-year roadmap in strategic partnership.These include - connecting people, trade and prosperity, defence and security , climate change and health.

Britain has been a strong defence partner of India ever since the country’s independence, with which, the country’s armed forces has deep engagement in various fields, besides being a major supplier of defence platforms and armaments to Indian armed forces. Britain also partners with India in the annual Konkan naval exercises, which is a message to the world community of its longstanding security relations with India.

This bilateral engagement will gain more traction, in the light of Britain’s tilt towards Indo-pacific quadrilateral group, which intends to checkmate China, by together reinforcing rule of law, freedom of navigation and overflight from Indian Ocean to South China Sea.

In the light of this, Indian strategic observers hope that Britain would not play a zero-sum game with Pakistan and recalibrate its Afghan policy, which should give comfort to India. India also hopes that Boris Johnson would be declaring more liberal migration and work – student visa for Indians.

Strong people to people relation between two countries has been the biggest factor in promoting ties. It is hoped that Boris Johnson’s visit to New Delhi and other Indian cities would usher in a new era of bilateral engagement, especially in the backdrop of changing world geo-political alignments.

Author is a senior journalist with expertise in diplomatic and strategic affairs; views expressed here are his personal