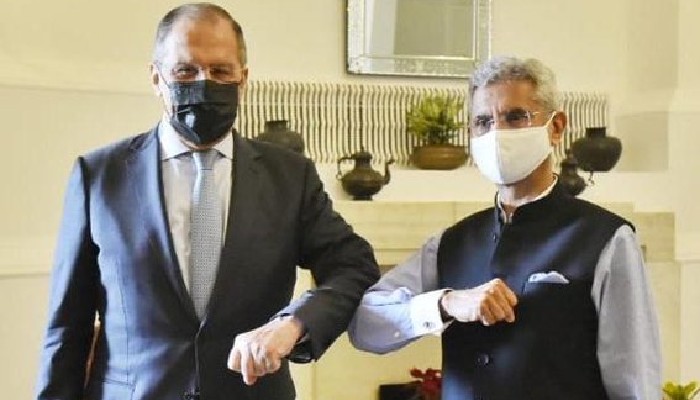 External Affairs Minister S Jaishankar on Tuesday said India and Russia relationship is important for global peace, security and stability. He was saying so at a joint press conference with his Russian counterpart Sergey Lavrov in New Delhi.

“We both understand the importance of our relationship to global peace, security and stability. And, therefore, as Foreign Ministers, we work hard to deliver on that responsibility,” S Jaishankar said.

Maintaining that much of his discussions with the visiting Russing Foreign Minister remained focussed on President Putin’s visit to India for the annual summit later this year, he said both sides held comprehensive and productive talks in a very warm and cordial atmosphere.

“We talked about long standing partnership in the nuclear, space and defence sectors. We assessed positively our economic cooperation, noting the new opportunities in Russian Far East. We spoke of connectivity, including the International North-South Transport Corridor and the Chennai-Vladivostok Eastern Maritime Corridor,” Jaishankar said

“There was naturally an exchange of views and assessments on important regional and global matters. This had a particular importance because we are both members of the UN Security Council right now. We are a non-permanent member, Russia is a permanent member. Issues on which India is chairing UNSC committees came up in some detail. India has also taken over the Chair of BRICS and RIC from Russia for this year. And our common membership of the G-20, ASEAN-led forums, SCO and CICA added to the substance of our conversation,” Jaishankar added.

The two leaders also discussed the importance of maintaining peace and stability in Afghanistan.

“For India, what happens in Afghanistan impacts its security directly. I shared our approach that a durable peace there would require harmonising interests of all, both within and around that country. The peace process must be based on foundational principles to which we all subscribe. And a political solution should mean an independent, sovereign, united and democratic Afghanistan,” Jaishankar said.

EAM Jaishankar pointed out that there was an exchange of views on West Asia, the Gulf and Iran.

“This is a geography where we both have long standing equities and our active diplomacy reflects that to great measure. Peace and stability in such a sensitive and vital region is in global interest,” he said.

“I shared our view-point on the Indo-Pacific. As our Prime Minister pointed out at the Shangri-La Dialogue some years ago, contemporary challenges require countries to work together in new and different ways. Such cooperation also reflects the multi-polar and rebalanced character of global politics. India is strongly committed to ASEAN centrality and this is underlined by the Indo-Pacific Oceans Initiative that it has been advocating at the East-Asia summit. As we implement our Act East and beyond policy, Russia is a very important partner. Whether it is their Far East or whether it is the Chennai-Vladivostok Corridor,” EAM Jaishankar added.

On his part, Russian Foreign Minister Lavrov said that the India-Russia relationship does not change with world fluctuation. He added that Russian President Vladimir Putin’s message to PM Narendra Modi is that the two countries are going to build up the investment, which was reduced due to COVID-19.

He further said the discussion on defence cooperation and weapons manufacturing was held. He dismissed suggestions of any future military alliance between Russia and China.

"By the way, we have heard speculation about pro-military alliances not only with respect to Russia and China relations, we have also heard about such alliances allegedly being promoted such as Middle East-NATO, Asia-NATO. Today we exchanged views on this and our Indian friends have the same position as we. We believe that this is counterproductive," Lavrov told the press in Russian language.

"We are interested in inclusive cooperation that is for something, not against somebody," he asserted.