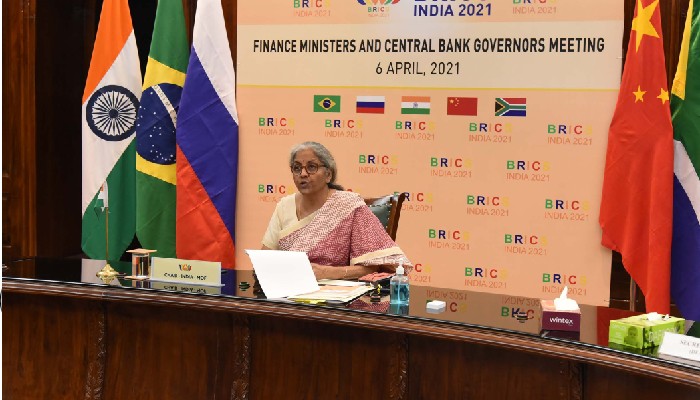 As 2021 BRICS Chair, India’s approach is focused on strengthening intra-BRICS cooperation based on continuity, consolidation and consensus

Hosting the first meeting of BRICS Finance Ministers and Central Bank Governors as BRICS chair for 2021, India on Tuesday called for efforts towards delivering outcomes that reflect the needs and aspirations of BRICS in particular and emerging markets and developing economies in general.

Speaking on the BRICS priorities and agenda for 2021, Indian Finance Minister, Nirmala Sitharaman emphasised the importance of BRICS in responding to the COVID-19 crisis through policy support and enhancing international coordination.

She highlighted that the world's largest vaccine drive by India is under way even as the country has supplied 64.5 million vaccine doses to 84 countries.

Speaking on the importance of social infrastructure and use of digital technologies, the Finance Minister underscored the merit in engaging with the private sector and exploring the innovative financing models.

The Finance Minister talked about thematic priorities for New Development Bank for discussion during 2021 and the issues of membership expansion, the release said. She also called for greater coordination among BRICS member countries on the issues of 16th general review of quotas of the IMF.

As 2021 BRICS Chair, India’s approach is focused on strengthening intra-BRICS cooperation based on Continuity, Consolidation and Consensus, noted the statement.