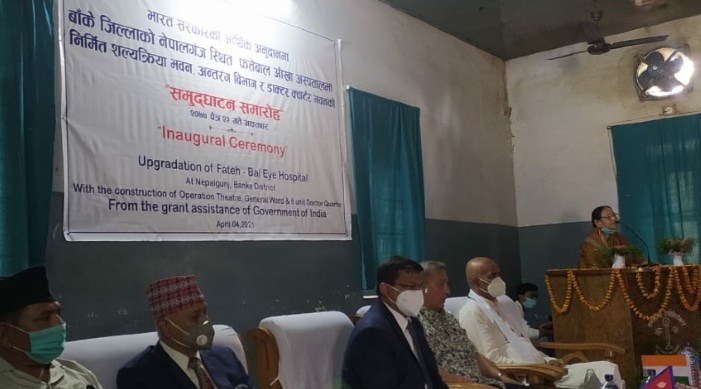 The inaugural ceremony of the upgraded hospital.

Complementing the efforts of the Government of Nepal in augmenting health infrastructure, the building of Fateh-Bal Eye Hospital in Nepalgunj upgraded through New Delhi’s financial assistance was inaugurated on Sunday.

The hospital building was upgraded with Government of India’s financial assistance of NRs. 46.64 million.

The new hospital building has been built under the ‘Nepal-Bharat Development Cooperation’ and has a general ward, a private ward, an operation theatre, a training hall, doctors quarters, inside road and drainage systems, according to a statement of the Indian Embassy in Kathmandu, Nepal.

The project was implemented by District Coordination Committee, Banke, the statement added.

The revamped building was jointly inaugurated by Karun Bansal, Head of Administration, Embassy of India to Nepal along with District Coordination Committee, Banke and Fateh-Bal Eye Hospital Management Committee and local representatives.

Since 2003, the Government of India has been taking up HICDPs, which are projects costing less than NRs 50 million, across Nepal. India has already completed 446 HICDPs in Nepal, of which 41 are in Province 5, including five in Banke District, the Indian Embassy statement said.

Nine Government of India funded projects are under various stages of completion/implementation in Province 5, including one in Banke District.

The Embassy of India has also gifted 12 ambulances and three buses to various health posts, NGOs and educational institutiins in Banke District, the statement mentioned.

Under the reconstruction grant assistance (US $ 50 million) of Government of India to Nepal, 147 Health Posts are being built across 10 districts of Nepal affected by 2015 earthquake, it further said. Out of 147, contracts for 25 health post have been awarded, the statement added.

The Indian Embassy in Kathmandu added that India has also gifted 823 ambulances to various government and Not for Profit organizations working in the health sector in Nepal.

Moreover, Government of India provided grant assistance of INR 20.99 crores to Nepal Netra Jyoti Sangh (NNJS) for conducting 400 Diagnostic Screening & Treatment (DST) camps and surgery camp for Cataract in 52 districts and for TT in 14 Districts and for holding eye camps in schools in remote areas of Nepal.

India has gifted total five vehicles to NNJS, including a mobile eye care van for holding eye camps in schools to screen and treat eye ailments in children, the statement said.