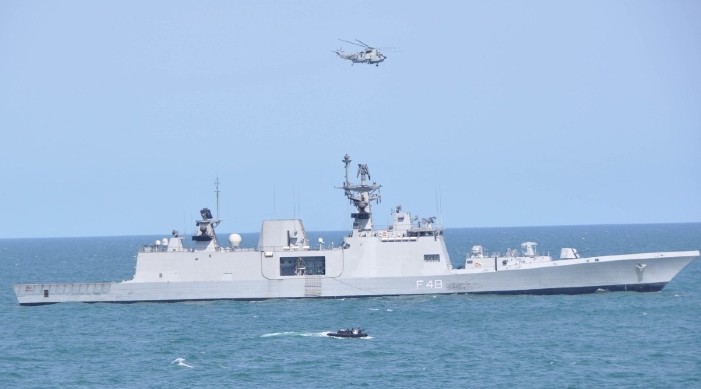 For the first time, the Indian Navy is participating in a French naval exercise along with fellow Quad member nations, the United States, Australia and Japan, in the eastern Indian Ocean from March 5 to 7.

"Indian Navy ships INS Satpura [with an integral helicopter embarked] and INS Kiltan along with P8I long-range maritime patrol aircraft are participating, for the first time, in multilateral maritime exercise La Pérouse, being conducted in the eastern Indian Ocean Region from 05 to 07 Apr 2021," the Ministry of Defence said in a release.

This is the second time Quad nations are coming together after the Malabar exercise in November last year.

The exercise La Pérouse, led by the French Navy, has participation by FN Ships Tonnerre, an amphibious assault ship and frigate Surcouf. The United States Navy is represented in the exercise by amphibious transport dock ship Somerset.

Her Majesty's Australian Ships (HMAS) Anzac, a frigate, and tanker Sirius have been deployed by RAN for participation in the exercise while Japan Maritime Self Defence Ship (JMSDF) is represented by the destroyer Akebono. In addition to the ships, integral helicopters will also participate in the exercise.

The Indian Navy said the exercise will showcase high levels of synergy, coordination and interoperability between the friendly navies.

"Participation by the Indian Navy in the exercise demonstrates the shared values with friendly navies ensuring freedom of seas and commitment to an open, inclusive Indo-Pacific and a rules-based international order,” the statement read.