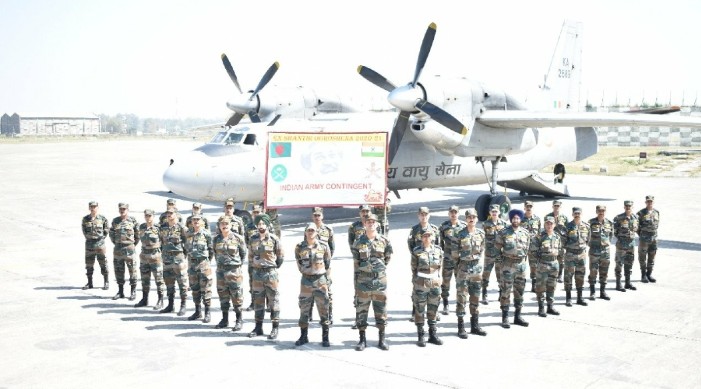 The theme of the exercise is 'Robust Peace Keeping Operations'

An Indian Army contingent will participate in the multinational military exercise Shantir Ogroshena- 2021 in Bangladesh starting from Sunday.

The Indian Army contingent comprising of 30 personnel including Officers, JCOs and Jawans of a Battalion from the Dogra Regiment will participate in the exercise along with contingents of Royal Bhutan Army, Sri Lankan Army and Bangladesh Army from April 4-12.

The theme of the exercise, which will be attended by military observers from the US, UK, Turkey, Saudi Arabia, Kuwait, and Singapore, is “Robust Peace Keeping Operations”.

Exercise Shantir Ogroshena (Front Runner of Peace) 2021 will commemorate the birth centenary of Bangladesh's ‘Father of the Nation’ Bangabandhu Sheikh Mujibur Rahman and mark 50 glorious years of the country's liberation.

India’s participation in the multinational military exercise this month is a testimony to the growing military-to-military training and exchanges between the two countries.

As an important bilateral defence cooperation endeavor between India and Bangladesh, a bilateral military exercise Sampriti was held in Meghalaya in February last year.

The exercise, hosted alternately by both countries, is aimed at strengthening and broadening interoperability and cooperation between the Indian and Bangladesh Armies.

In the maritime domain, the two countries are also engaged in Joint Search and Rescue Operations in the Bay of Bengal and have enhanced cooperation in the field of Humanitarian Assistance and Disaster Relief (HADR) activities.

During Bangladesh Prime Minister Sheikh Hasina’s visit to India in October 2019, the two countries had also finalized a MoU on Establishment of Coastal Surveillance Radar System in Bangladesh.

India, that boasts of a robust ship building industry with an ecosystem of world class public and private ship building companies, has offered to partner with Bangladesh shipyards for construction of platforms as per the latter’s requirements for both commercial and defence purposes.

The year 2021 started on a special note. For the first time, a 122-member contingent from Bangladesh Tri-services participated in the 26 January Republic Day Parade.

Meanwhile, Bangladesh is also looking to strengthen its strategic partnership with neighbor India.

Addressing the National Day programme to mark 50 years of Bangladesh’s independence last week, Prime Minister Sheikh Hasina had said that the people of her country will always remember India’s contribution to the country’s liberation in the 1971 war.

Recalling the joint operation of the India-Bangladesh allied forces which led to victory on December 16, 1971, she mentioned, "a notable number of Indian soldiers sacrificed their lives along with our freedom fighters and attained martyrdom. I remember their sacrifice with great honour".

Prime Minister Hasina with her counterpart Indian PM Narendra Modi laid the foundation a memorial in the honour of the Martyrs of the Indian Armed Forces who sacrificed their lives during Liberation War of 1971 at Ashuganj, Brahmanbaria.

A joint statement issued on the occasion of PM Modi’s visit to Bangladesh on 26-27 March said that during the delegation talks, the Prime Ministers expressed deep satisfaction over the existing defence cooperation between the two countries.

In this regard, both Prime Ministers emphasized on the frequent exchange of programs and enhancing cooperation in training and capacity building. The Indian side requested for early operationalization of the Defense Line of Credit.