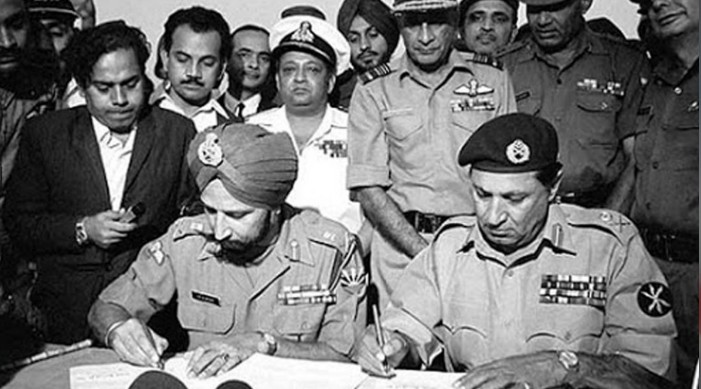 The website gives operations description, force matrix and views from Bangladesh about the 1971 military campaign

Replete with accounts of battles fought by the Indian defence forces during the 1971 Indo-Pak War, a website showcasing operations descriptions, force matrix and views from Bangladesh has been launched by India's Ministry of Defence.

The website was launched by Chief of Defence Staff General Bipin Rawat earlier this week.

The website, https://swarnimvijayvarsh.nic.in/,opens by showcasing both pictures from the 1971 Vijay Diwas and pictures of various events marking the Swarnin Vijay Varsh celebrations this year. It also has a section ‘Remembering 1971’ presenting a brief account of the war.

There are 5 separate sections that a reader can visit - Commemorative Events, Operations, Gallantry Awards, Featured Videos and Quotes. Besides the 5 sections there is also an important section- Perspective from Bangladesh.

Under the Commemorative Events category a visitor can keep abreast with the events organized by the Indian defence forces marking Swarnim Vijay Varsh.

From the Battle of Hilli fought between the Indian and Pakistani armies which is regarded as the most severe pitched battle that took place in East Pakistan to Indian Navy’s missile attack from the sea on Karachi Harbour using an innovative strategy, the Operations section helps the visitor relive the war.

The Gallantry Awards sections, showcases the awardees who have been conferred with military honours for their valour. It also gives a small citation about it.

The featured videos section includes a few videos prepared by the defence forces by including archival footage. This section also includes a Musical Ode to 1971 Victory at Sea. Other videos made of footage of the battle at Longewala and surrender of 93,000 Pakistani troops are also on the website.

The featured videos section also includes a 4 minutes 9 seconds long video titled- ‘The Fall of Dhaka- Based on a true story’ that gives glimpses of the 1971 war. It shows the horrors of Pakistan Army’s ‘Operation Searchlight’ that inflicted 300,000 casualties.

The video also notes that the US had sent the 7th Fleet to help Pakistan. However, Soviet Russia thwarted it away. According to the video the war ended on 6 December 1971 with Pakistan Army surrendering with more than 93,000 soldiers, the largest since World War-II.

A visitor to this website can read the quotes of Field Marshal Sam Manekshaw on leadership and messages from the Indian Army, Navy, Airforce chiefs and CDS Gen. Rawat.