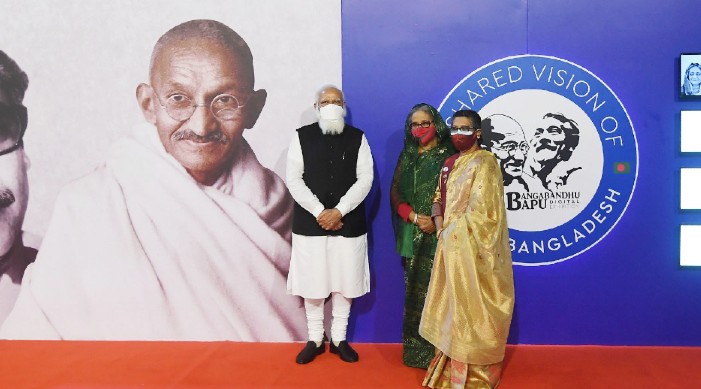 PM Modi and Bangladesh PM Hasina inaugurating a Digital exhibition on Bapu and Bangabandhu in Dhaka on March 26, 2021

In the course of his just concluded historic visit to Bangladesh, Prime Minister Narendra Modi along with his Bangladeshi counterpart Sheikh Hasina had jointly inaugurated the Bangabandu-Bapu digital exhibition that showcases life and struggle of India’s Father of Nation Mahatma Gandhi and Bangladesh’s Father of the Nation ‘Bangabandhu’ Sheikh Mujibur Rahman.

It was inaugurated at a time when Bangladesh is celebrating the golden jubilee of the country’s independence and the birth centenary of ‘Bangabandhu’ Sheikh Mujibur Rahman.

“Bapu and Bangabandhu are two exemplary personalities from the South Asian region, whose thoughts and messages resonate globally,” the Ministry of External Affairs had aptly said while issuing a statement after the exhibition was inaugurated on March 26.

Bangabandhu-Bapu digital exhibitions will be organized in India, Bangladesh, besides the UN and select cities of the world, indicating how the two countries are unsparing in their efforts to spread the message of struggle for freedom that the two iconic leaders led from the front.

Indeed, Bangabandhu’s struggle and sacrifice for the due rights of Bengali speaking people of then East Pakistan continues to inspire people of the region. His statement: “To do anything great, one has to be ready to sacrifice and show one’s devotion,” still reverberates across the world. Like Mahatma Gandhi, he preached what he practiced. Rightly said, the subcontinent will be proudly remembered by Bapu and Bangabandhu whose achievements and legacy are a source of strength and inspiration for all in the region and the world.

Amid this, Narendra Modi’s first prime ministerial visit to Bangladesh during the Covid-19 situation, showcased India’s commitment to neighbourhood first policy and its desire to walk shoulder to shoulder with Bangladesh.

This sentiment reflected clearly in the joint statement issued on the occasion of Prime Minister Narendra Modi’s visit to Bangladesh. “The two leaders expressed satisfaction at the excellent state of bilateral relations, based on deep historical and fraternal ties, which reflect an all-encompassing bilateral partnership based on equality, trust and understanding that transcends even a strategic partnership.”

Under the leadership of Prime Minister Narendra Modi and the ‘Neighbourhood First’ and ‘Act East’ doctrines of the NDA government, the bilateral relationship with Bangladesh leaped ahead.

Settling land and maritime boundary disputes, forging connectivity and energy partnerships have been key outcomes of growing camaraderie between Modi and Hasina.

Their bonhomie was on display when Prime Minister Hasina was amongst the first leaders to congratulate Modi on his resounding victory in the 2014 Lok Sabha election.

Within months of being voted to power in 2014, the NDA government under the leadership of Prime Minister Modi accepted a UN verdict on the dispute regarding the delimitation of the maritime boundary between India and Bangladesh, ending a four decade long dispute.

During that prime ministerial visit, India had extended a Line of Credit of US$ $ 2 billion. West Bengal Chief Minister Mamata Banerjee had also joined the Indian Prime Minister in Dhaka during the visit.

Between 2015 and 2019, Prime Minister Sheikh Hasina visited India four times, which is the highest for any Head of Government of Bangladesh to visit India in the span of 5 years. Several agreements on cooperation in defence, energy, trade and connectivity were signed during those visits.

The recently concluded visit of Prime Minister Modi provided an opportunity to further build on existing cooperation between the two countries on connectivity, cooperation in water resources, security, defence and power and also added new areas like A.I., environment and societal application.

Both countries also agreed to start cooperation in the civil nuclear and space sectors. In the nuclear field, India will develop the transmission lines for the Rooppur Nuclear Power Plant under the Line of Credit of worth over US$1billion. The Rooppur project will be the first initiative under an Indo-Russian deal to undertake atomic energy projects in third world countries. For the first time, Indian companies will be participating in a nuclear power project abroad.