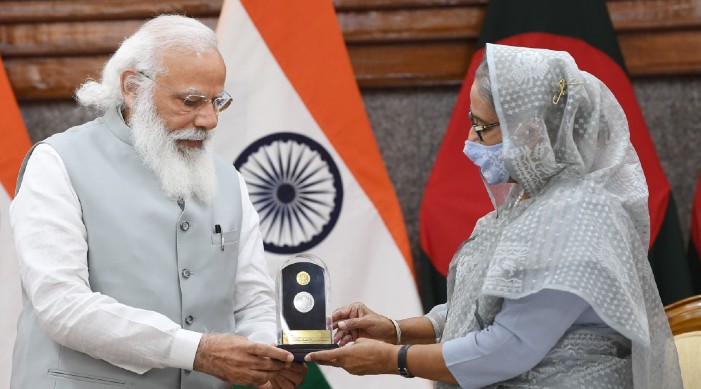 The two Prime Ministers also stressed upon the need for predictability of trade policies, regulations and procedures

On Saturday, both Prime Ministers held a tête-à-tête, which was followed by delegation level talks and the issuance of a joint statement on the occasion of the visit of the Prime Minister of India to Bangladesh.

The two leaders expressed satisfaction at the excellent state of bilateral relations, based on deep historical and fraternal ties, which reflect an all-encompassing bilateral partnership based on equality, trust and understanding that transcends even a strategic partnership, the statement said.

To enhance trade between the two countries, both Prime Ministers underscored the need for removal of non-tariff barriers, it said. The Bangladesh side requested for lifting the new policy of Indian Customs stipulating verification of certificates of origin issued from Bangladesh, the statement added.

The Indian side conveyed that under the provisions of the new Customs rules, in the event of a conflict between a provision of these rules and rules of origin of a trade agreement, the provisions of the rules of origin of the trade agreement shall prevail. Further, for bilateral trade to flourish, both leaders stressed the need for predictability of trade policies, regulations and procedures.

The two Prime Ministers also stressed upon the need for predictability of trade policies, regulations and procedures, the statement noted.

The Indian side congratulated the Bangladesh side on its upcoming graduation from the LDC status. Both sides emphasized on expeditious conclusion of the ongoing joint study on the prospects of entering into a Comprehensive Economic Partnership Agreement (CEPA), the statement said further.

As per the statement, underscoring the important role that the jute sector has played in Bangladesh’s economy, the Bangladesh side invited Indian investment in the jute mills of Bangladesh under public-private partnership as part of the government’s decision to revitalize and modernize the jute sector through manufacturing of value added and diversified jute products.

In this regard, the Bangladesh side urged more meaningful cooperation in this sector between both countries and requested India to withdraw the duties imposed on export of jute products from Bangladesh since 2017.

The Indian side welcomed cooperation in the jute sector. On anti-dumping duty on jute, Indian side agreed to look into the matter.

Both Prime Ministers stressed the urgent need for up-gradation of infrastructure and facilities of the Land Customs Stations (LCSs) / Land Ports in a coordinated manner to facilitate trade between the two countries.

The Indian side reiterated its request for at least one major land port without port restrictions or with a negative list of restrictions, on the border with the North Eastern Region of India, for easier market access, starting with ICP Agartala-Akhaura.

The two Prime Ministers reiterated the importance of harmonization of standards and mutual recognition of agreements and certificates for enhancing bilateral trade.

It was agreed that in the spirit of liberalizing trade between the two countries, Bangladesh Standards and Testing Institute (BSTI) and the Bureau of Indian Standards (BIS) would collaborate for the capacity building and development of testing and Lab facilities.

The Indian side urged the Bangladesh side to remove the existing practices against the Indian companies from participating in tenders floated by various Ministries and the agencies of the Government of Bangladesh. The Bangladesh side informed that there is no country-specific restriction in the process.

The two Prime Ministers welcomed the opening of new border haats at the agreed locations and hoped that they would be mutually beneficial for the economic development of the people living along the remote and inaccessible points of the border of both countries.