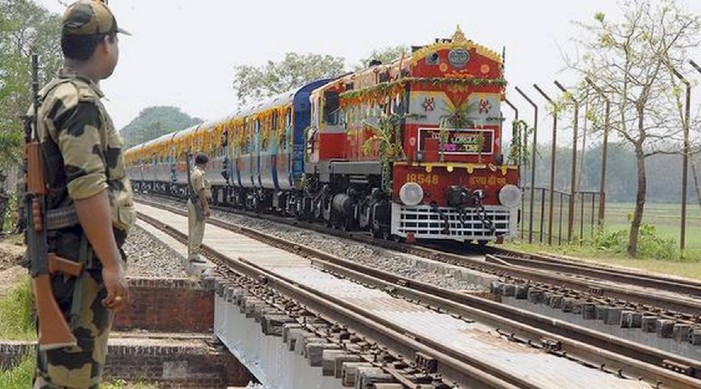 Bangladesh has sought rail connectivity with Bhutan through Chilahati-Haldibari route

Giving connectivity between India and Bangladesh a boost, Prime Minister Narendra Modi and his Bangladesh counterpart Sheikh Hasina on Saturday jointly inaugurated a new passenger train between Dhaka and New Jalpaiguri in West Bengal via a video conference.

This was the third train connectivity between the two countries, emphasizing the importance being attached to regional economic integration through connectivity.

In the joint statement issued on the occasion of Prime Minister Modi’s visit to Bangladesh, both leaders reiterated the same, maintaining that for the benefit of all in the region, enhanced connectivity is the need of the hour.

India expressed gratitude for Prime Minister Hasina’s initiative of revitalizing the pre-1965 rail connectivity as well as for Bangladesh’s support for the numerous connectivity initiatives through rail, road and waterways.

On its part, Bangladesh reiterated its eagerness to partner in the ongoing initiative of the India – Myanmar - Thailand trilateral highway project. To facilitate better connectivity and simplify movement of passengers and goods between both the countries, both leaders agreed to an early operationalization of the BBIN Motor Vehicles Agreement through expeditious signing of the enabling MoU for Bangladesh, India, and Nepal to commence the movement of goods and passengers, with provision for Bhutan to join at a later date.

Bangladesh side, as per the joint statement, also requested India for favourable consideration of the new connectivity routes proposed by Bangladesh, namely allowing additional land ports of Bhadrapur-Bairagi Galgalia, Biratnagar-Jogmani and Birganj-Raxaul to be connected with Banglabandha-Fulbari and Birol-Radhikapur by road as alternative routes.

India was also requested to consider connecting Birol-Radhikapur and Rohanpur-Singhabad rail-interchanges with Biratnagar-Jogmani as this would help reduce the distance and cost of transportation of goods by rail from Bangladesh to Nepal.

Highlighting the benefits of connectivity and the trial run of trans-shipment of Indian goods from Kolkata to Agartala via Chattogram, the India side urged for early operationalization of the agreement on the use of Chattogram and Mongla Ports for the movement of goods to and from India, including finalization of cost effective pricing and regulatory orders.

The Indian side requested for transshipment arrangement in Munshiganj and Pangaon as part of the protocol on inland water transit and trade until the completion of the bilateral project to develop Ashuganj container terminal. The Bangladesh side informed the infrastructure limitations in this regard and that work is being planned for upgradation of the facilities.

Prime Minister Modi recalled the recent inauguration of the Maitree Shetu over River Feni and appreciated Bangladesh’s support in materializing this crucial connectivity project. Bangladesh Prime Minister Sheikh Hasina stated that inauguration of the Feni bridge is a testament to the Bangladesh Government’s continued commitment to support initiatives to strengthen connectivity and economic integration in the region, particularly for the North-East of India.

Both sides agreed to develop remaining trade and travel infrastructure to facilitate the optimal usage of this new bridge.

The Prime Minister of Bangladesh offered the use of Chattogram and Sylhet International Airport, by the people of North East India, especially of Tripura. Bangladesh also informed that Saidpur Airport is being developed as a regional airport for the use of the people of this region.


With the vaccination drive being in full swing in both countries, both sides agreed to explore resuming regular air travel and lifting restrictions for movement through land ports at the earliest as well as to operationalize the train and bus services between the two countries at the earliest. Noting that the full resumption of travel will depend on the COVID situation, the Indian side expressed hope that the full scale travel will resume soon.

Recognizing the ongoing cooperation between the two countries in the sector of education, the two Prime Ministers reaffirmed their commitment to widening this cooperation for mutual benefit. In this connection, they appreciated the various collaborative arrangements between the universities and educational institutes of the two countries. Both leaders directed their concerned authorities for early conclusion of the MoU on Mutual Recognition of Academic Qualifications.

The Bangladesh side offered to conduct short term exchange programmes for interested Indian youth in areas such as fisheries, agriculture, disaster management, SMEs and women empowerment. Both sides reiterated the desire to continue regular exchanges to promote culture, education, science and technology, youth and sports and mass media.