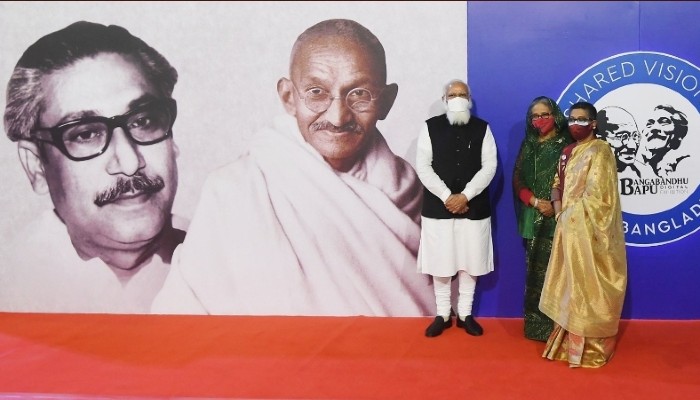 “Remembering two exemplary personalities from our region, whose thoughts and message resonates globally. A digital exhibition on Bapu and Bangabandhu was inaugurated earlier this evening,” tweeted the Prime Minister’s Office on Friday.

The digital exhibition at the Bangabandhu International Conference Centre (BICC) showcases the inalienable bond that unites India and Bangladesh. The exhibition dedicated to the lives of the two great leaders of the subcontinent. It captures the shared culture and heritage of the two countries.

The exhibition commemorates 3 epochal events of both the countries. This year Bangladesh is celebrating the 50th year of Bangladesh’s Freedom. It is also the Birth Centenary of Bangabandhu Sheikh Mujibur Rahman. Third, this year marks the Golden Jubilee of India-Bangladesh diplomatic relations.

Earlier, during their virtual summit in December, both prime ministers inaugurated the exhibition in New Delhi.

India’s Foreign Secretary Harsh Vardhan Shringla, in a special briefing on the Prime Minister’s visit to Bangladesh on Wednesday, had stated that the Bapu-Bangabandhu Exhibition will travel to 18 countries including United Nations Headquarters in New York.

On his arrival at the BICC, Sheikh Hasina received her Indian counterpart Narendra Modi. Later, both the premiers and Sheikh Rehana, younger daughter of Bangabandhu, went round the exhibition and took part in a photo session.
Bangabandhu-Bapu Digital Exhibition curator and Indian national Birad Rajaram Yagnik briefed both the prime ministers while they were visiting the exhibition.

Earlier on Friday, speaking at the National Day celebrations as the guest of honour, the Prime Minister had remarked Bangabandhu had a mesmerizing personality and was blessed with an unwavering commitment to further human empowerment.

No wonder all sections of society were empowered by him, he added.