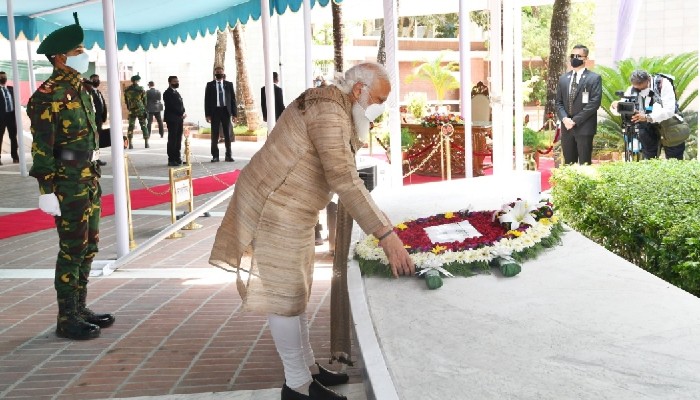 The life of Bangabandhu epitomized the freedom struggle of the people of Bangladesh, Indian Prime Minister Narendra Modi wrote in the visitors book at Bangabandhu Sheikh Mujibur Rahman's mausoleum on Saturday.

Prime Minister Modi paid tribute at the mausoleum in Tungipara on the second day of his visit to Bangladesh, marking the first-ever visit by any foreign Head of State or government to the Bangladeshi leader's ancestral home.

Signing the visitors book at the Mausoleum Complex, he wrote, "The life of Bangabandhu epitomized the freedom struggle of the people of Bangladesh for their rights, for the preservation of their inclusive culture and their identity.”

Ministry of External Affairs Spokesperson Arindam tweeted about the plantation of the Bakul tree sapling, calling Bangabandhu Sheikh Mujibur Rahman as “One of the tallest leaders of the last Century, whose life and ideals continue to inspire millions!”

"Mujib Chirantar" - Bangabandhu's message is eternal. And it is in this spirit only that we honor his legacy too,” tweeted Bagchi, who is accompanying the Prime Minister on this visit.

Earlier, speaking at the 50th National Day Celebration held in Dhaka on Friday, the Indian Prime Minister praised the courage and leadership of Bangabandhu Sheikh Mujibur Rahman and noted his appeal to common people of Bangladesh.

“Bangabandhu was then a ray of hope for Bangladeshis in these barbaric times. His courage, leadership had decided the fate of Bangladesh that it will not be a free country. Under his leadership many common people had become members of Muktibahini,” PM Modi had said.

The Indian Prime Minister began day 2 of his visit by offering prayers at the Jeshoreshwari Kali Shaktipeeth in Satkhira, which is one of the 51 Shaktipeeths in the Puranic tradition. He also visited sites of cultural importance in Satkhira, Orakhandi.