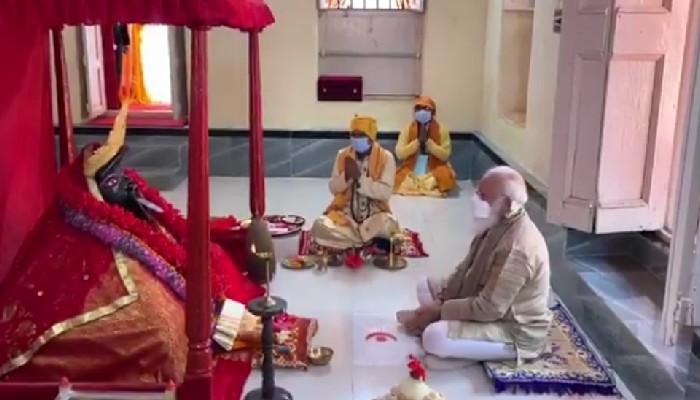 Extending a hand of friendship, Prime Minister Modi announced grant for construction of a community hall-cum-cyclone shelter attached to the temple

Paying obeisance to Maa Kali on a visit to the Jeshoreshwari Kali Shaktipeeth in Satkhira on the second day of his Bangladesh visit, Prime Minister Narendra Modi performed pooja at the temple and placed a hand-made mukut made of silver with gold plating on the Goddess.

Prime Minister Modi Started the second day of his two-day visit to Bangladesh by taking the blessings of Goddess Kali and performing pooja at the Jeshoreshwari Kali Shaktipeeth in Satkhira, which is one of the 51 Shaktipeeths in the Puranic tradition.

“Today, I got the opportunity to visit this Shaktipeeth to pay obeisance to Maa Kali. I prayed to her to free the human race from Covid-19,” the Prime Minister told wire service ANI.

The Prime Minister also placed a handmade mukut, made of silver with gold plating, on Goddess kali, as per a statement issued by the Ministry of External Affairs. This mukut was handmade over three weeks by a local artisan.

Extending a hand of friendship, Prime Minister announced grant for construction of a community hall-cum cyclone shelter attached to the temple.

ANI quoted the Prime Minister saying, “When Maa Kaali mela is held here, large devotees come from across border (India). A community hall is needed which should be multi-purpose so that when people come here during Kaali puja, it is useful to them too.”

“It should be useful even for social, religious and educational events. Most importantly, it should act as a shelter for all at the time of disasters like cyclone. Government of India will do construction work. I express gratitude to Bangladesh government that they have wished us well for this,” PM Modi was quoted as saying.

This structure would be used by the devotees during the Annual Kali Pooja and Mela of the temple and would also be used by broader community of all faiths as a storm shelter and community facility.

The temple is situated in Ishwaripur village in Satkhira district and is one of the 51 Shakti Peeths scattered across India and neighbouring countries. The Bangladesh authorities renovated the Jashoreshwari temple in Satkhira ahead of Prime Minister Modi's visit.

On the second day of his visit to Bangladesh, the Prime Minister is also visiting the Bangabandhu Musolem Museum Complex at Tungipara in Gopalgunj district. He will also visit sites of cultural importance in Satkhira, Orakhandi.