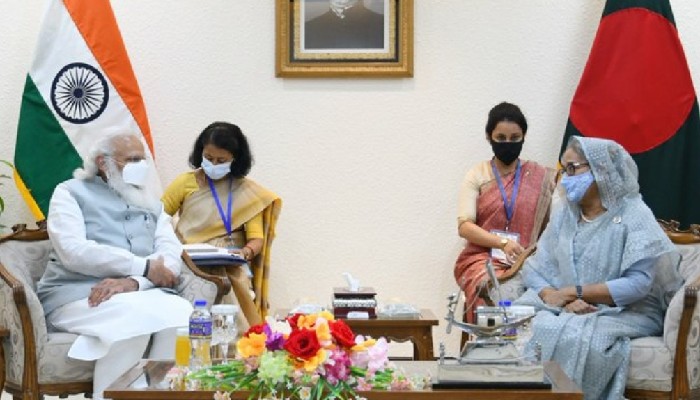 The issue figured during his talks with Bangladeshi PM Sheikh Hasina, who requested to conclude the interim agreement on the sharing of the waters of the Teesta river.

According to a joint statement released by India's Ministry of External Affairs, PM Hasina underscored that to alleviate the sufferings and save the livelihoods of millions of people dependent on the Teesta river basin, it is necessary that Bangladesh receives its fair share of the Teesta waters.

The Indian side also requested for early finalization of the draft of the interim agreement for sharing of water of Feni River, pending with the Bangladesh side which had been agreed upon by both sides in 2011.

Recalling that the MoU on withdrawal of 1.82 cusec of water from Feni River was signed during the visit of Prime Minister Sheikh Hasina in October 2019, the Indian side urged the Bangladesh side for early implementation of the MoU.

According to the joint statement, the two leaders directed their respective Ministries of Water Resources to work towards an early conclusion of the Framework of Interim Agreement on sharing of waters of six common rivers, namely, Manu, Muhuri, Khowai, Gumti, Dharla and Dudhkumar.

Bangladesh also reiterated the urgency for India to allow excavation of the remaining portion of Rahimpur Khal for utilization of Kushiyara River waters for irrigation of the Upper Surma Kushiyara project, as the matter is directly linked with the food security of Bangladesh.

In this regard, early concurrence was requested from India on the proposed MoU to be signed between the two countries for the withdrawal of water from the Kushiyara River by both sides, pending signing of the Agreement in this regard.

The Indian side conveyed that the MoU was under consideration, in consultation with the relevant state government, the joint statement said.

The two Prime Ministers also directed the Joint Technical Committee, formed for the purpose, to expeditiously commence the feasibility study of the Ganges-Padma barrage and other alternative options in Bangladesh for optimum utilization of the Ganges waters received by Bangladesh as per the Ganges Water Sharing Treaty, 1996.