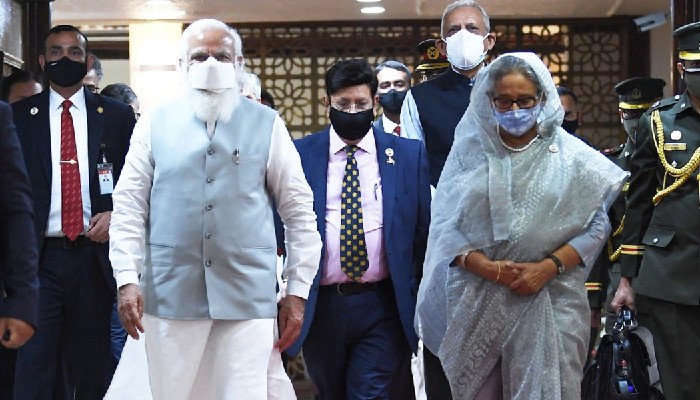 Connectivity between India and Bangladesh was a major beneficiary as PM Modi and his Bangladesh counterpart Sheikh Hasina inaugurated Mitali Express, a new passenger train from Dhaka in Bangladesh to New Jalpaiguri in India.

Taking ahead cooperation in the key energy sector, the two leaders performed the ground breaking ceremony for infrastructure development of the evaporation facility at the 2X1200 MW Rooppur Nuclear Power Plant. The Power evacuation would be financed by Indian supported EXIM Bank’s LoC to Bangladesh.

As part of the commemorative celebrations, both countries have decided to re-link the road from Mujibnagar in Bangladesh to Nadia in India and name it as ‘Swadhinata Sarak’ commemorating the historic road where people from both sides gathered at a critical juncture of the independence struggle of Bangladesh.

These included the foundation stone laying of the monument at Ashugunj by the Bangladesh government in memory of martyred soldiers of the Indian Allied Forces who fought for the Independence of Bangladesh.

They also inaugurated the extended development work at Rabindra Bhawan at Kuthibari at Shilaidaha, Kushtia in Bangladesh

Boosting people-to-people contact, the leaders of the two countries also inaugurated 3 new border haats at the Bangladesh-India border along the districts of Simalgunj and Slyhet of Bangladesh and the state of Meghalaya in India.

India and Bangladesh also entered into 5 MoU’s in presence of the two leaders.

A Tripartite MoU on Supply of ICT equipment, courseware and reference books and training for Bangladesh-India Digital Service and Employment and Training (BDSET) Centre was the fourth to be signed between the two countries.

Another Tripartite MoU on Establishment of Sports Facilities at Rajshahi College field and surrounding areas was the fifth to be signed.

The two prime Ministers also released commemorative stamps by their respective postal departments on the occasion of 50 years of Bangladesh-India Friendship.

Bangladesh Prime Minister Hasina also presented a crest containing a gold and a silver coin released on the occasion of the Birth Centenary of the Father of the Nation Sheikh Mujibur Rahman to Indian Prime Minister Narendra Modi.

Hasina also handed over a silver coin released on the 50th anniversary of the Independence of Bangladesh and a watch commemorating the Birth Centenary celebrations of the father of the nation.