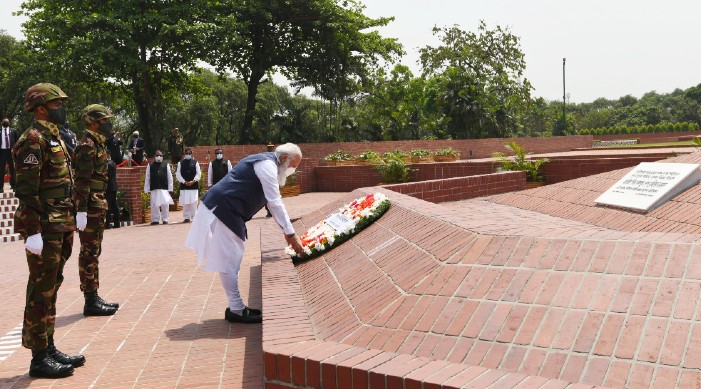 Soon after his arrival on a two-day visit to Bangladesh on Friday, Prime Minister Narendra Modi visited the National Martyrs’ Memorial, the national monument of Bangladesh to pay tributes to the valour and sacrifice of those who gave their lives for the liberation of Bangladesh from Pakistan in 1971.

The Prime Minister planted a sapling of Arjun tree at the memorial premises as a mark of respect for the valorous martyrs of Bangladesh.

“From the pages of history,” said a tweet from the Prime Minister’s Office (PMO), announcing the plantation of the sapling by the Prime Minister. It explained further, “In the same complex, Atalji had planted a sapling during his Bangladesh visit in 1999.”


From the pages of history.

PM @narendramodi planted a sapling at the National Martyr’s Memorial in Savar today.

In the same complex, Atal Ji had planted a sapling during his Bangladesh visit in 1999. pic.twitter.com/88RH0tTvKW


Prime Minister Modi signed the visitor’s book at the National Martyrs’ Memorial where he praised the valour of millions of people who laid down their lives for the cause of Bangladesh’s liberation.

“I pay my heartfelt tribute to the patriotic martyrs of Bangladesh whose glorious sacrifices enabled the birth of this great Nation,” the Prime Minister wrote.

“May every visitor to this revered ground honour the sacred memory of the millions who were slain but not silenced. Their valour will continue to inspire future generations to fight injustice and defend the cause of righteousness,” he wrote further.

“On behalf of the people of India, I pray that the eternal flame at Savar remains a lasting reminder of the noble victory of truth and courage over deceit and oppression,” Modi added.

The monument is located in Savar, about 35 km north-west of Dhaka and was designed by Syed Mainul Hossain.