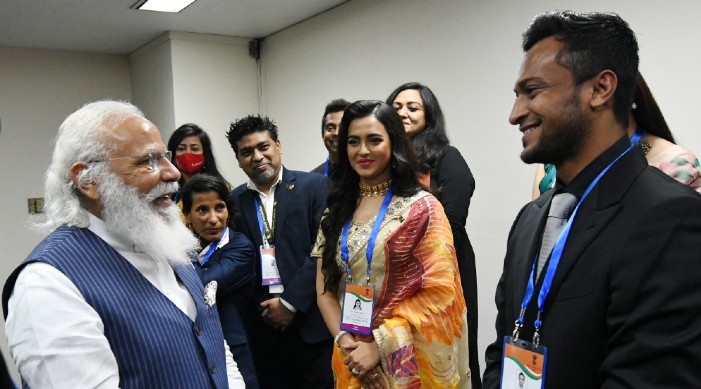 PM Modi on his arrival in Dhaka met with diverse groups of Bangladesh’s polity and society, including Bohra community leaders with whom he conversed in Gujarati

As part of his two-day visit to Bangladesh, Prime Minister Narendra Modi on Friday met and interacted with opposition leaders, community leaders, representatives of minorities, mukhtijoddhas, friends of India and youth icons.

Wide gamut of issues pertaining to the two counties’ bilateral relations were discussed when Prime Minister Modi met and interacted with opposition leaders from various political parties of Bangladesh.

During his meeting with political leaders from the 14-party alliance, Prime Minister Modi's discussion centred on diverse issues of bilateral nature and strengthening of ties between the two countries.

Continuing his interactions with diverse groups of Bangladesh’s polity and society, the Prime Minister met with Bohra community representatives with whom he conversed in Gujarati. He also met with members of the Indian community in Dhaka.

On the first day of the visit, the Prime Minister Modi and his Bangladesh counterpart PM Sheikh Hasina will inaugurate the Bangabandhu-Bapu exhibition in Dhaka that will showcase the life and legacy of these two great leaders.

Considering the significance of the historic ‘Mujib Borsho’, Prime Minister Modi will visit the Bangabundhu Musolem Museum complex at Tungipara in Gopalgunj district of Bangladesh.

He will be the first Indian dignitary to visit Tungipara which is the family home of Bangabandhu Sheikh Mujibur Rahman.

Earlier in a statement before his departure to Bangladesh, Prime Minister Modi stated he looks forward to visiting Bangabandhu’s Samadhi in Tungipara to pay my respects to his memory.

The Prime Minister will also visit sites of cultural importance in Satkhira, Orakhandi.

He said he also looked forward to offering prayers to Goddess Kali at the ancient Jashoreshwari Kali temple, one of the 51 Shaktipeeths in the Puranic tradition in Sathkhira.

“I am particularly looking forward to my interaction with representatives of the Matua community at Orakandi, from where Sri SriHarichandra Thakur ji disseminated his pious message,” he had said.