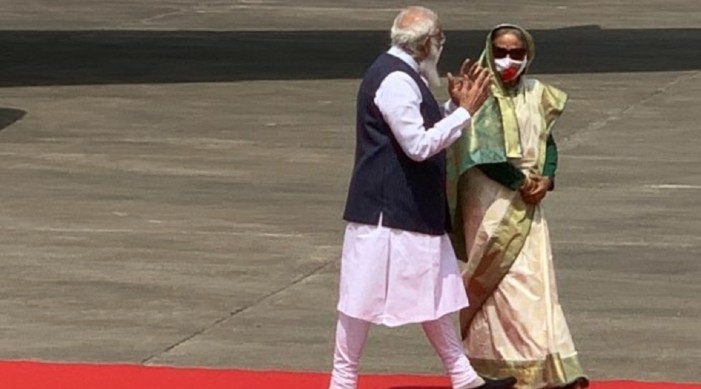 As the world steps towards a post-pandemic era of normalcy, the confluence of three most significant events has kept Bangladesh on the priority of the South Asian leaders’ itinerary.

For the first time after the virus outbreak, India’s Prime Minister Narendra Modi has reached Dhaka on a two-day visit (March 26 and 27). In this spring, the linguistic South Asian nation commemorates “Mujib Barsho,” the birth centenary of the father of Bangladesh Sheikh Mujibur Rahaman, the Golden Jubilee of the 1971 Liberation War, and the 50th anniversary of diplomatic ties with India. India too has glories to celebrate this year as Delhi’s defence and political support in the liberation is immense.

Received by Prime Minister Sheikh Hasina and greeted by the Dawoodi Bohra community, Modi was the man of the moment, the Guest of Honour at the National Day of Bangladesh and Bangabandhu International Conference. Paying tribute to the martyrs at the National Martyr’s memorial, PM Modi wrote, “Their valour will continue to inspire future generations to fight injustice and defend the cause of righteousness.”

Ahead of Mujib Barsho, Delhi took several initiatives to pay tribute to the founding father of Bangladesh. Earlier this week, India conferred the prestigious Gandhi Peace Prize on him.

While day one of the Indian Prime Minister's schedule was mostly designed for his diplomatic mission, the second one is for political communications, ahead of the assembly elections in states like Assam and West Bengal, sharing deep cultural and linguistic linkages.

PM Modi along her Bangladeshi counterpart Sheikh Hasina Wajed are expected to kick off Mitali Expresss, the third passenger service after Maitri Express and Bandhan Express, which will connect India’s New Jalpaiguri in the Northern part of West Bengal and Dhaka via a 595 km rail line. The train will not merely strengthen people to people connectivity but also be the lifeline of the citizens of two neighbours sharing cultures, roots and tongues.

The construction of the petroleum pipeline from Siliguri to Dinajpur in Bangladesh was started in 2020. Most recently, a 1.9 km-long bridge called the Maitri Setu (Friendship Bridge) over Feni river was inaugurated on March 9 which will boost connectivity between Bangladesh and India.

Hopping towns and territories beyond capital Dhaka is not very common when heads of states visit Bangladesh. What has made this visit very memorable and colorful, is the Indian leader's zeal to reach out in Bangladesh.

Prime Minister Modi will travel to Tungipara to pay tribute to Mujibur Rahman at his sepulchre. He is the first ever Indian dignitary to be at the Bangobandhu Mausoleum. He will travel to the South-west part of Bangladesh to offer prayers in Jeshoreshwari temple in Satkhira and visit Orakandi shrine of the Matuas, the disciples of spiritual leader Harichand Thakur. PM Modi will interact with a delegation of 300 Matua followers.

The foreign policy grammar of Modi government has always emphasized the regional communication, co-operation and connectivity. Bangladesh lies in the epicentre of the Delhi doctrines like Neighbourhood First and Act East. Prior to Prime Minister Modi’s visit, while in Dhaka, Indian External Affairs Minister S Jaishankar affirmed the importance of Bangladesh in India’s Neighbourhood First and Act East policies, terming Bangladesh-India friendship as a “360 degree partnership.” Dhaka has also accepted India’s invitation to be in the Indo-Pacific club.

Bangladesh gets 28% of India’s development out of the total foreign assistance budget. A line of credit worth $8 billion was extended to Bangladesh recently. India runs High Impact Community Development Projects in Bangladesh in the ares of culture, disaster management, health and community welfare.

At a time when SAARC is in a frozen stage, Bangladesh must explore opportunities to upgrade the massive human resource of South Asia, one of the word’s most densely populated regions. Bangladesh is a beneficiary of the SAARC satellite and other technical assistance extended by India. India gifted 10 locomotive rail engines to Bangladesh during last Eid.

Bilateral trade is one of the key factors that keeps the two neighboours prosperous and immensely connected. But despite the two being one of the largest trade partners, there’s a huge trade deficit. In the financial year 2018-19, India exported worth $9.21 billion to Bangladesh. And import was $1.04 billion during this period.

During Foreign Secretary Harsh Vardhan Shringla’s visit in Dhaka in August last year, India and Bangladesh addressed the commercial concerns. The two states signed the second addendum to Protocol on Inland Water Transit and Trade. The two signatory states of this deal agreed to conduct the first trial run for trans-shipment of Indian cargo through Bangladesh under the Agreement on the use of Chattogram and Mongla ports.

After the Prime Minister Modi’s sojourn, it is very obvious that Bangladesh and India will identify the irritants and attempt to mitigate them. Both states have seen success in cross-border trade in electricity. During PM Modi’s visit, there are chances of progress on the Comprehensive Economic Partnership Agreement (CEPA). Three MoUs will be signed in the areas of disaster management and institutional co-operation between the two neighbours.

Once called “the bottomless basket,” Bangladesh has scaled newer heights and has exceeded several parameters of development and the indexes. Per capita GDP of the state is almost similar to India now. Bangladesh’s economic rise and graduation from the Least Developed Category will impress the South Asian neighbours for closer ties.

The two neighbours have crossed many challenges. The average life span of both of their citizens is now longer than earlier. India’s two million vaccine gift has brought relief and hope among the Bangladeshis.

At a time when China aggressively jostles for her influence and cajoles South Asian capitals for partnership, and Pakistan comes forward to normalize relations and shows some genuine gestures like lifting restrictions on visa, PM Modi’s deft diplomacy throughout his tenure will create ripples. PM Hasina’s foreign affairs advisor Gawher Rizvi has clarified that despite being a BRI signatory, Dhaka will stand by Delhi and termed India as “the most important neighbour.”


(Ayanangsha Maitra is a freelance journalist in India and associated with Dhaka-based think-tank Centre for Governance Studies; views expressed are personal)