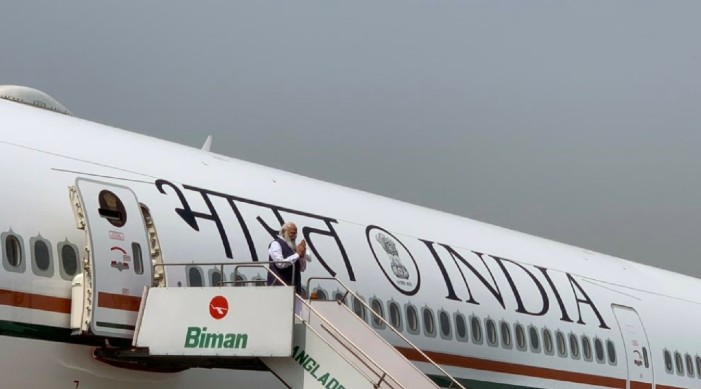 In a spirit of good neighbourliness, we have resolved complex issues amicably, Prime Minister Narendra Modi wrote in a Bangladeshi publication

India will remain Bangladesh's partner as the two countries jointly march towards the golden future, Prime Minister Narendra Modi has said in an Op-Ed article in a prominent Bangladeshi publication.

In an opinion article published by Bangladesh's The Daily Star to coincide with his two-day visit to the country, Prime Minister Modi wrote, "It is time to once again chart a bold ambition for our partnership, as Bangabandhu would have done. With the spirit and enterprise of our people as our Bhagya Vidhata, the dispenser of our shared destiny, such a future is closer than ever".

With growing income and prosperity, Bangladesh is progressively realising the dream of Bangabandhu, under the able leadership of Prime Minister Sheikh Hasina, he noted in the article, 'Imagining a different South Asia with Bangabandhu'.

"Our exciting recent journey gives me hope. In a spirit of good neighbourliness, we have resolved complex issues amicably. Our land and maritime boundaries stand settled. We have substantial cooperation covering almost all aspects of human endeavour. Our trade has reached historic levels, aiding economic activities in each other's countries. Our people-to-people exchanges remain robust as ever," the Indian Prime Minister wrote in the article.

Prime Minister Modi also highlighted the "good progress" in the area of connectivity, pointing out that cargo from Bangladesh can move to Nepal and Bhutan through India. "We are in the process of implementing a similar arrangement for Indian cargo to reach India's North Eastern States through Bangladesh," he added.

According to Prime Minister Modi, concerted efforts were also being made to operationalise inland waterways, which will allow Bangladesh barges to reach all the way to Varanasi and Sahibganj in India.

In the article, the Indian Prime Minister described Bangabandhu's life as a story of struggle. "Faced with oppression and brutality, he stood unflinching".

Despite this unflinching commitment to his cause, and despite all the persecutions he suffered, Bangabandhu retained a generosity of spirit that is a mark of true greatness, Prime Minister Modi wrote.

"It was this rare combination of deep-seated belief in his own ideals, and yet the openness of mind to accept a different opinion, that made Bangabandhu one of the greatest statesmen of our times," he added.

Read the complete article in The Daily Star