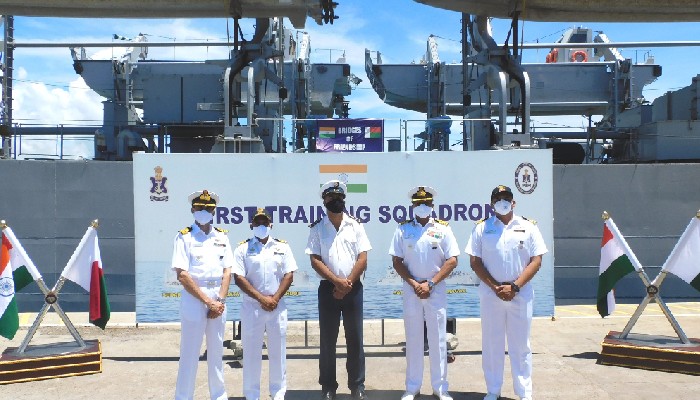 INS Shardul made a port call at Antsiranana, Madagascar as part of First Training Squadron on March 21

In line with India’s move to strengthen its outreach in the Indian Ocean Region, Indian Naval ship INS Shardul made a port call at Antsiranana, Madagascar as part of First Training Squadron’s (1TS) Overseas Deployment from March 21 – 24. Officer trainees of the 99th Integrated Officer Training Course are embarked on board during the ship’s visit, the Ministry of Defence said in a statement on Thursday.

Adhering to Covid19 protocols, the port call was conducted in a non-contact format and a virtual conference with officials of Madagascar Armed Forces was held on March 23.

The Chief of Ankarana Defence Zone welcomed the ship and appreciated the growing relations between the defence forces of two nations. The conference was followed by a visit of Captain Sam HiengTwion, Naval Base Commander, Antsirana to INS Shardul.

The Joint exercise bears testimony to the growing bonds between the maritime forces of both the nations and aimed at common objectives of ensuring maritime security by India and Madagascar and interoperability between the two navies.

India and Madagascar share a strong maritime relation and visit by the First Training Squadron to Antsiranana is a step towards further strengthening the bonds of friendship between the two nations.