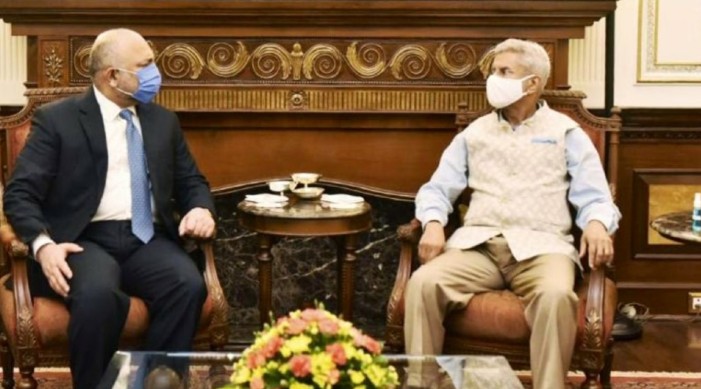 Enduring peace in Afghanistan is important for the peace, security and prosperity of the region and the world, External Affairs Minister S Jaishankar has said.

During a meeting with Afghan Foreign Minister Mohammad Hanif Atmar, who visited New Delhi on March 22-23, Jaishankar also underscored the importance of a comprehensive and permanent ceasefire for a successful Afghan peace process.

According to a press release issued by India's Ministry of External Affairs (MEA) on Wednesday, talks between Jaishankar and Atmar focused upon strengthening the strategic partnership between the two countries and Afghan peace efforts.

Atmar, who was accompanied by a senior delegation from the Ministry of Foreign Affairs, Afghanistan, was on his first visit to India after assuming his current charge.

The talks were held in a warm and friendly atmosphere, with a very detailed and healthy exchange of views, the MEA statement said.

A range of issues were discussed during the meeting including India's extensive development partnership with Afghanistan, issues of mutual interest in the region and the world, and the Afghan peace efforts, the MEA statement said.

It added that EAM Jaishankar reassured the Afghan Foreign Minister of India's long-term commitment towards a peaceful, sovereign, stable and inclusive Afghanistan where the rights of all sections of the society are protected within a democratic constitutional framework.

The Afghan Foreign Minister thanked India for the development cooperation of US$ 3 billion and implementation of projects which have benefited all 34 provinces of Afghanistan.

It may be recalled that EAM Jaishankar and Foreign Minister Atmar had signed a MoU in February 9 for the construction of Shatoot dam to provide drinking water to Kabul city, in the presence of Prime Minister Narendra Modi and Afghan President Ashraf Ghani.