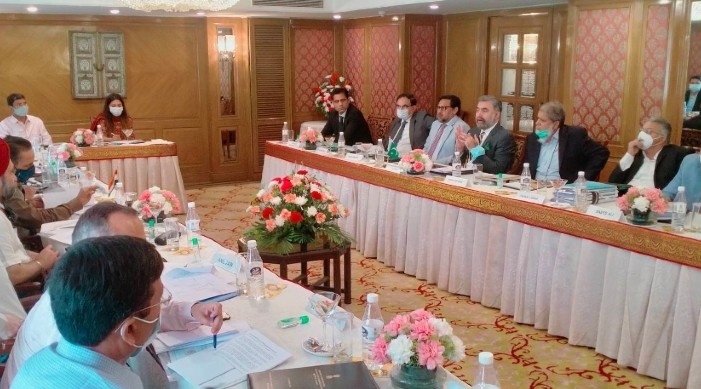 The 116th meeting of the Permanent Indus Commission.

The designs of the Pakal Dul and Lower Kalnai hydroelectric power projects in Jammu and Kashnir are fully compliant with the provisions of the Indus Waters Treaty (IWT), India has told Pakistan.

The Indian side was responding to queries from Pakistan during discussions at the two-day annual meeting of the Permanent Indus Commission (PIC) in New Delhi on March 23-24.

The Indian side held that these projects are fully compliant with the provisions of the Treaty and provided technical data in support of its position, the Ministry of External Affairs (MEA) said in a press release issued on Wednesday.

Representatives from Pakistan also requested India for sharing of information on design of other Indian hydropower projects being planned to be developed. The Indian side assured that the information will be supplied as and when required to be supplied under the provisions of the Treaty, said the MEA.

Indus Water Commissioner PK Saxena led the Indian delegation while Syed Muhammad Mehr Ali Shah headed the Pakistani side. This was the 116th meeting of the PIC.

The Indus Commissioners from India and Pakistan reaffirmed their commitment to interact more frequently in an attempt to resolve the issues by bilateral discussions under the Treaty.

Under the provisions of the IWT signed between India and Pakistan in 1960, all the waters of the Eastern Rivers - Sutlej, Beas, and Ravi - are available for the unrestricted use of India.

Pakistan receives for unrestricted use all the waters of the Western Rivers - Indus, Jhelum, and Chenab.

Under the Indus Waters Treaty, India has been given the right to generate hydroelectricity through run-of-the-river projects on the Western Rivers. This is, however, subject to specific criteria for design and operation.

The Commission is supposed to meet at least once a year, alternately in India and Pakistan. It could not do so in 2020 due to the Covid-19 pandemic.

It has been agreed that the next meeting of the PIC will be held in Pakistan on mutually convenient dates.