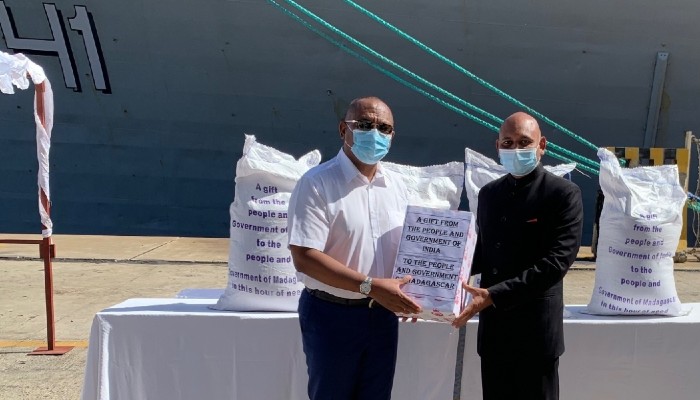 India has provided 1,000 Metric Tonnes of rice and 100,000 Hydroxychloroquine tablets to Madagascar in response to an appeal for assistance to deal with natural calamities.

The consignment arrived in Indian Naval Ship Jalashwa at Port Ehoala, Madagascar, on Monday as part of Mission SAGAR-IV, highlighting the importance accorded by India to relations with the countries in the Indian Ocean Region (IOR).

The consignment was handed over to the Government of Madagascar at an official cemerony attended by Prime Minister Christian Ntsay, on Tuesday. Governor of Anosy Region Jerry Hatrefindrazana and Mayor of Fort Dauphin Georges MamyRandrianiaina were present.

The Indian side was represented by Ambassador of India to Madagascar Abhay Kumar and Commanding Officer INS Jalashwa Captain Pankaj Chauhan.

PM Ntsay wrote in the ship’s visitor’s book,
“I’m pleased to welcome this donation granted by the Government of India. I really appreciate the excellent relationship between India and Madagascar. This demonstrates the friendship and brotherhood between our both people.”

The outreach by the Government of India aims to help Madagascar tide over the ongoing COVID-19 pandemic and severe drought that they have been facing.

According to the Ministry of Defence, this is the second visit of an Indian Navy ship to the island country within a span of one year.

Earlier, as part of Mission Sagar-I, In May-June 2020, the Indian Navy had delivered essential medicines to the nation. INS Jalashwa's visit is in keeping with India's response to the disasters that have struck Madagascar in the past year.

‘Mission Sagar’ builds on the excellent relations existing between the two countries to battle the natural calamities and its resultant difficulties, the defence said in a statement.

The deployment also resonates the vision of our Prime Minister of Security and Growth for All in the Region ‘SAGAR’.

The operation is being progressed in close coordination with the Ministry of External Affairs, and other agencies of the Government of India.