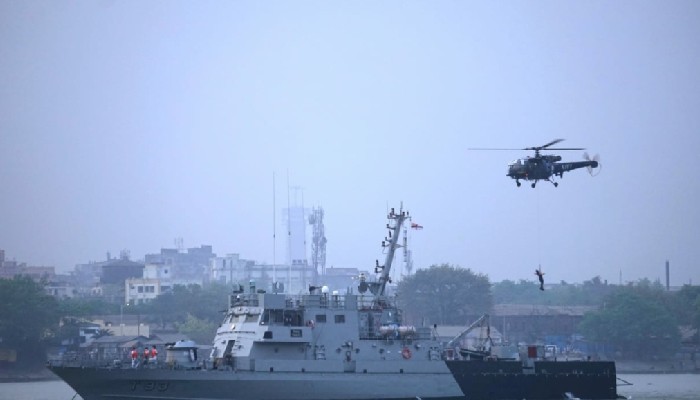 Marking the 50th anniversary celebrations of the 1971 India-Pakistan War this year, Indian Naval Ship Netaji Subhas, conducted an operational demonstration on the Hooghly river in Kolkata on Saturday.

The unique event marking the Swarnim Vijay Varsh 2021 displayed maritime prowess of assets and personnel who sail the high seas as well as operate along the coast. Governor of Bengal Jagdeep Dhankar was the chief guest at the occasion, said a press release issued by the Indian Navy.

A high-speed ‘Steampast’ by four armed Navy Patrol Boats opened the demonstration on the Hooghly, followed by the CG ACV, which operating from Haldia, glided over surface of the Hooghly river displaying its unique manoeuvres, it said.

It was followed by WJFACs sailing down the river, executing precise navigational menoeuvers and anchoring mid-river, added the release.

Formation flying by a SeaKing and Chetak helicopter took the demo to the Skies, after which the Chetak demonstrated ‘Search and Rescue’ of a simulated rescue of a drowning person from the river. Both helicopters thereafter, displayed their aerial prowess by performing ‘helibatics’ for the audience.

The MARCOS displayed their skill in undertaking fast airborne insertion into occupied territory by slithering down from the SeaKing onto a Gemini Assault Watercraft, thereafter, carrying out a simulated clandestine beach assault.

They were then quickly ‘extracted’ by the SeaKing utilising a method known as STIE (Small Team Insertion and Extraction), wherein the Commandos latched onto a special rope underslung from the helicopter and were flown out handing onto it.

The final aerial act witnessed the Chetak displaying vertical replenishment and transferring a Memento from the river to the seating area which was presented by the Flag Officer Commanding in Chief (FOC-in-C) East to the Chief Guest.

After a final high-speed salute by the Naval Patrol Boats, the gathering was treated to some patriotic fervour by the Navy Band.
The operation demonstration concluded with the ‘Sunset Ceremony’, as part of which a ‘Report’ was made to the Chief Guest, the Governor of West Bengal, by a woman naval officer.

The Naval Ensign at Babu Ghat, and on the Naval ships anchored mid-river, was lowered and struck down.

After the Ensign was lowered, the ships fired flares into the sky and illuminated their silhouettes. A stellar fireworks display over the Hooghly brought the curtain down on the ‘Samudri Virasat Pradarshan’.