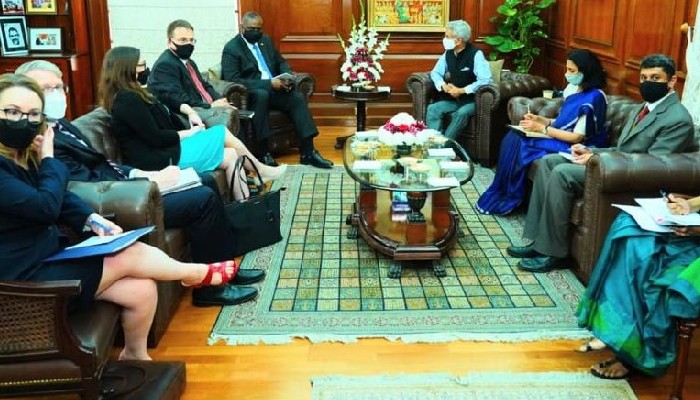 Llyod Austin stressed that as the two largest democracies in the world, human rights and values are important to both of countries

External Affairs Minister S Jaishankar on Saturday held an hour long meeting with the visiting US Defence Secretary Llyod Austin and both sides discussed the strategic situation in the Indo-Pacific, Afghanistan, West Asia and Europe people familiar with the development said.

With regard to the situation in the Indo-Pacific, the US side briefed about recent visits in East Asia, while EAM Jaishankar spoke about India’s current security challenges and its long term strategic look. Both sides also talked about changing global scenarios, including Europe and West Asia.

During the meeting, Afghanistan was addressed in some detail. As per sources, the peace process and the ground situation, as also the concerns and interests of regional powers and neighbours were deliberated on during the meeting. The EAM appreciated the Biden Administration’s engagement with India on this issue.

Both sides recognized the steady growth of bilateral cooperation; the EAM apprised the Defence Secretary of the progress and potential of various aspects of the leadership.

Highlighting the commonalities and convergence between India and the US, EAM Jaishankar said that the relationship was unique for the breadth and intensity of cooperation that covered so many domains.

The US Defence Secretary said that as the two largest democracies in the world, human rights and values are important to both countries and they will lead with these values.

The EAM emphasised that a strong relationship between the two democracies was not only important for both countries but for the rest of the world.