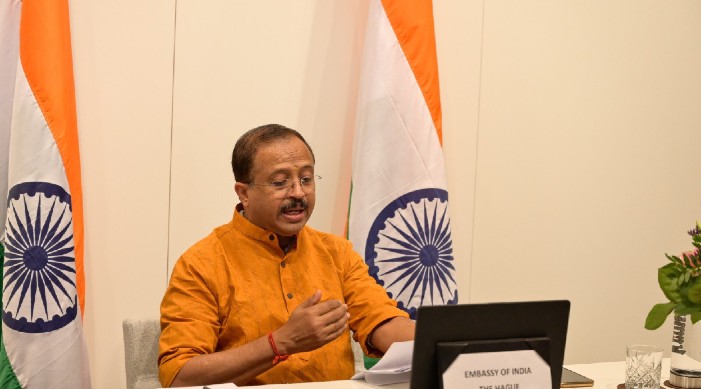 ‘We will create health literacy in Ayurveda and make it available as a patient centred medical system’: Muraleedharan

India will soon become the world leader of integrative medicine with the rich medical heritage ready to adapt to new situations and to take up any challenges. This will be made possible with the constant efforts by the central government to make Ayurveda the way of life, said Minister of State for External Affairs V Muraleedharan.

Speaking at the Valedictory Session of the 4th Global Ayurveda Festival, Muraleedharan said that the center is focused in making Ayurveda playing a major role in nation building and also contributing to meet the developmental goals of the global community.

Muraleedharan, on behalf of the organizers and participants of the event, declared to create health literacy in Ayurveda and make it available as a patient centred medical system, initiate and engage in dialogues across sciences, cultures and borders in the process of contemporising and globalizing Ayurveda; and work towards consolidation, expansion, preservation and exchange of Ayurveda knowledge.

He further pledged to “establish a realistic and mutually contributing sastra-science interface; engage transdisciplinary medical experts to collaborate, integrate and thus optimize health care delivery; and to establish and project Ayurveda driven health care system as a model to the world; train and promote the effective use of Ayurveda tenets, medicines and therapies to better mental and physical health, especially in strengthening the immune response.”

Speaking during the event, the MoS said that he looks forward to engage in deliberations with the policy makers and think tanks to create structure and guideline for globalization of Ayurveda and to explore formal dialogue pathways with foreign governments and bodies for the same; and to help, guide and encourage sustainable use of medicinal plants and biodiversity conservation.

During his speech, Muraleedharan also appreciated the support of Prime Minister Narendra Modi on carrying forward the Ayurvedic practices in India.

The fourth edition of the Global Ayurveda Festival was inaugurated by Prime Minister Modi on Friday.

Noting that people are realising the benefits of Ayurveda and its role in boosting immunity, the Prime Minister asserted that the current situation presents a right time for it and traditional medicines to become even more popular globally.

"From the plants to your plate, from matters of physical strength to mental well-being, the impact and influence of Ayurveda and traditional medicine is immense," he said.