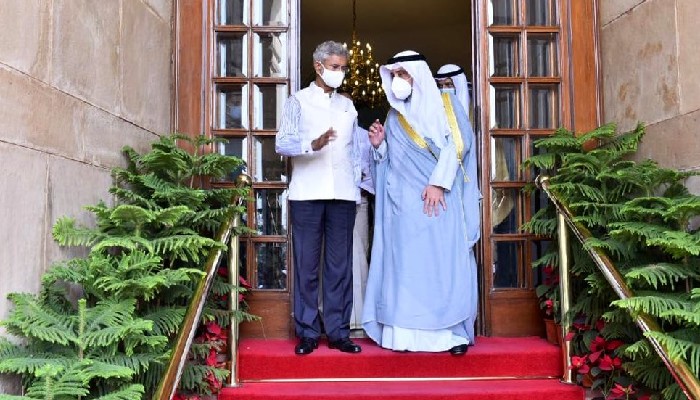 As per the Ministry of External Affairs, during the meeting the two sides reviewed all aspects of India-Kuwait bilateral relationship and discussed regional, international developments and agreed to coordinate closely on issues of mutual interest in multilateral forums.

They also explored ways and means to impart further dynamism in the traditional and friendly ties between the two countries.

The Kuwait Foreign Minister thanked the Government of India for supplying Kuwait with 200,000 doses of ‘Made in India’ Covishield vaccines in February 2021.

External Affairs Minister S Jaishankar thanked the leadership and the Government of the State of Kuwait for hosting a large Indian community in Kuwait and taking care of them during Covid-19 pandemic.

The EAM expressed his hope that Indian community will be able to resume travel to Kuwait in larger numbers soon. He also expressed India’s continued support to the State of Kuwait in its fight against Covid-19 pandemic. Both sides emphasized the need to enhance cooperation in the area of health security.

India is amongst the largest trading partners of Kuwait. There are significant opportunities for further strengthening and deepening ties in sectors such as energy, trade, healthcare, defence and security, science and technology, IT, cyber security, culture, education and tourism. The External Affairs Minister invited more investments from Kuwait into India in diverse sectors including energy, infrastructure, food security, healthcare and education.

Earlier, during the Kuwait Foreign Minister’s visit, a Joint Statement on establishment of a Joint Ministerial Commission at the level of Foreign Ministers to steer the relationship was issued.

The Joint Commission Meeting (JCM) will act as an umbrella for all bilateral institutional engagements such as Foreign Office Consultations and Joint Working Groups.

Apart from the existing Joint Working Groups on hydrocarbons, manpower and mobility, and healthcare, new JWGs on trade and investments, defence and security etc are envisaged to be established.

The two sides will also jointly celebrate the 60th anniversary of establishment of diplomatic relations between them during 2021-22.