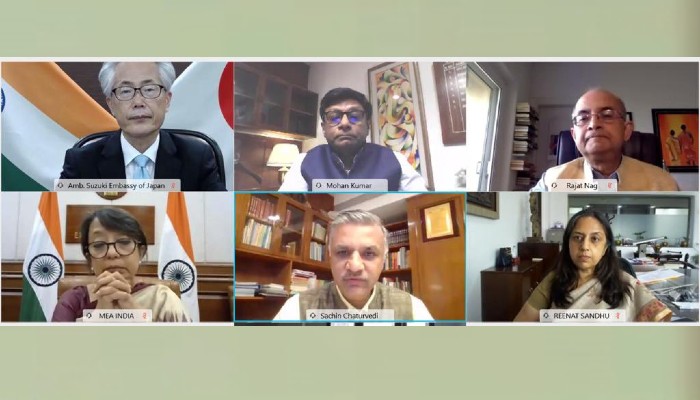 “Act East Policy is at the centre of our connectivity orientation and a fulcrum of our broader approach to the Indo-Pacific,” said Riva Ganguly Das

Under its vision of Indo-Pacific, India has taken several initiatives to improve physical and digital connectivity and aims to build more than 80,000 km of roads with an investment of around US $107 billion under its Bharatmala Pariyojana, Secretary (East) in the Ministry of External Affairs Riva Ganguly Das said while participating in a virtual seminar on connectivity cooperation for a free, open and inclusive Indo-Pacific on Thursday.

She said connectivity forms an important pillar of India’s Act East policy and its doctrine of Security and Growth for All in the Region (SAGAR) announced by Prime Minister Narendra Modi in 2014 and 2015 respectively, which form the building blocks for India’s Indo-Pacific Vision.

“India’s Indo-Pacific Vision envisages a free, open and inclusive region, which embraces all nations in the region and beyond in a common pursuit of progress and prosperity. The Indo-Pacific Oceans Initiative or IPOI envisages practical implementation of this vision with its seven pillars of cooperation and collaboration, with connectivity being one such pillar,” she said.

“Beyond our borders, India has devoted more resources and assigned greater priority to building connectivity in our immediate neighbourhood. Since 2005-06, India has extended Lines of Credit worth nearly US $ 31 billion to more than 64 countries,” she added.

“Our Act East Policy is at the centre of our connectivity orientation and a fulcrum of our broader approach to the Indo-Pacific. Our efforts are focused on connecting our North-East with the dynamic economies of South East Asia, and enhancing connectivity within the North East itself,” the Secretary East maintained.

Starting from the neighbouring countries, Integrated Check Posts (ICPs) are being constructed or expanded to facilitate trade and mobility along the borders with Nepal, Bangladesh, Bhutan, and Myanmar.

Rail and Road Inland waterway Connectivity agreements are being improved with Nepal and Bangladesh, while the oil pipeline from Motihari in India to Amlekhgunj in Nepal was inaugurated in 2019.

“Our efforts in Myanmar include the Kaladan Multi-Modal Transit project, India-Myanmar- Thailand Trilateral Highway and the Rhi-Tiddim Road. India is also considering the eastward extension of the IMT Highway towards Cambodia, Lao and Vietnam,” she said.

“We are now exploring to build connectivity between Andaman & Nicobar and Sabang in Indonesia and also between Vishakhapattanam, Chennai and Kolkata and Ranong port in Thailand. We intend to establish direct shipping routes between India and Vietnam,” she added.

“Towards the West, India is developing the Chabahar Port as a gateway for onward connectivity to and from Afghanistan and Central Asia. It has potential to be an important link in the International North South Transport Corridor (INSTC). INSTC is an important trade corridor project, wherein India is partnering with 12 countries to establish an economic corridor for the benefit of our peoples,” the MEA Secretary said.

Towards the South, Sri Lanka and Maldives are the focus of our maritime connectivity efforts in the Indo-Pacific Region. In Sri Lanka, India has extended nearly US$ 1.2 billion towards the development of the railway sector.

“The Jaffna airport, in Northern Sri Lanka, is now reconnected with a direct flight to India. India and Maldives have operationalized a cargo ferry service. We are also looking to build other infrastructure and connectivity projects in Male,” the Secretary East maintained.

On the Digital Connectivity front, the launch of the South Asian Satellite by the Indian Space Research Organisation (ISRO) in 2017 was an important step.

On the multilateral and the regional fronts as a member of mechanisms such as the ASEAN, BIMSTEC, Mekong Ganga Cooperation, India is also undertaking various regional connectivity initiatives.

“We are currently discussing a Coastal Shipping Agreement and Motor Vehicle Agreement in the BIMSTEC format and also in the Bangladesh, Bhutan, India and Nepal (BBIN) group. We are also working on extending India’s National Knowledge Network to BIMSTEC partners. Cooperation under BBIN is also being discussed in the areas of power and water resources management,” she said.

“Our efforts to build connectivity can only succeed in synergistic partnership with other countries sharing the same purpose and objectives. And this synergistic partnership was the vision behind Prime Minister Modi’s announcement of Indo-Pacific Oceans Initiative (IPOI) in 2019 as an initiative for the countries in the region and beyond to collaborate for security and growth of the region.

With regard to India and Japan, she said seeking the synergy between India’s “Act East” policy and Japan’s “Partnership for Quality Infrastructure”, the two countries have agreed to develop and strengthen reliable, sustainable and resilient infrastructures that augment connectivity within India, and between India and other countries in the Indo-Pacific region.

While talking about number of connectivity initiative undertaken by Japan in India, she said the Mumbai-Ahmedabad High Speed Rail, the Western Dedicated Freight Corridor (DFC), the Delhi-Mumbai Industrial Corridor, the Chennai-Bengaluru Industrial Corridor (CBIC) are all mega projects on anvil.

Japan is also partnering in various connectivity projects in Northeast India including the 20 kilometers long four lane bridge between Dhubri in Assam and Phulbari in Meghalaya.

Given Japan’s expertise in development of quality infrastructure “we believe that Japan’s lead on the Connectivity Pillar of IPOI will give a boost to connectivity in the Region and contribute to unlocking the potential for an equitable, positive and forward-looking change in the region contributing to Security and Growth of the Indo-Pacific,” she said.