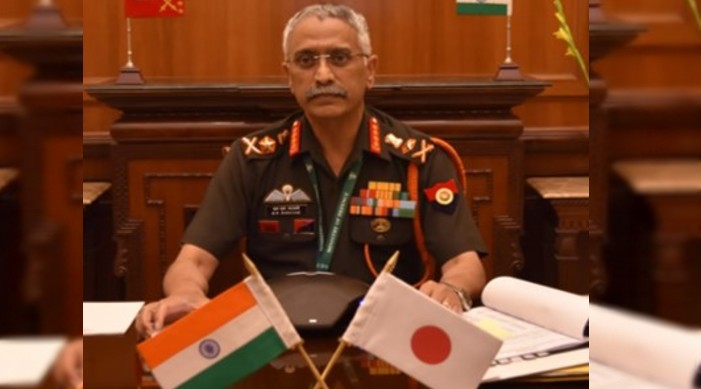 The Generals discussed further collaboration between the two forces

Indian Army Chief M M Naravane on Tuesday held a conversation with Chief of Staff of Japan Ground Self Defense Force (JGSDF), General Yuasa over phone and both discussed cooperation between the two armed forces and exchanged their views on furthering army to army collaboration between the two sides.

Tweeting about it, the JGSDF public relations office wrote, “GEN Yuasa, the Chief of Staff, JGSDF held a discussion with GEN MM Naravane, the Chief of the Army Staff, Indian Army over the phone on March 16th.”

“Both Generals exchanged their opinions on JGSDF-IA defense cooperation/exchanges and shared their understanding to further collaborate,” the JGSDF public relations office said in another tweet.

This was the second such conversation between the two countries’ Army Chiefs since September 14, 2020.

Significantly, the talks between the two Generals were held just ahead of US Defense Secretary Lloyd Austin’s three-day visit to India, beginning from March 19.

Japan together with India, Australia and the US is a member of Quad, an informal group which recently held a leadership-level summit in a virtual format and for the first time ever, it came out with the joint statement: “The Spirit of the Quad.”

Last year, India and Japan concluded the Acquisition and Cross-Servicing Agreement (ACSA), giving naval forces of the two countries access to fuel and servicing at major Indian and Japanese naval bases, including Djibouti and Andaman and Nicobar islands.

On March 9, ahead of Quad dialogue among India, Japan, Australia and the US, Japanese PM Yoshihide Suga had a telephonic conversation with Indian Prime Minister Narendra Modi and the two leaders shared their views that cooperation towards realizing a free and open Indo-Pacific is becoming increasingly important.

“The two leaders also exchanged views on the regional situation. In this context, Prime Minister Suga expressed serious concerns regarding unilateral attempts to change the status quo in the East and South China Sea, China's Coast Guard Law and the situation in Hong Kong and the Xinjiang Uyghur Autonomous Region (XUAR),” a statement issued by the External Affairs maintained.

The two leaders had also exchanged views on Japan-India relations and concurred that they would continue their effort to materialize the “Japan-India Special Strategic and Global Partnership” through cooperation in areas such as security and defence, economic relationship including digital fields and people-to-people exchanges.