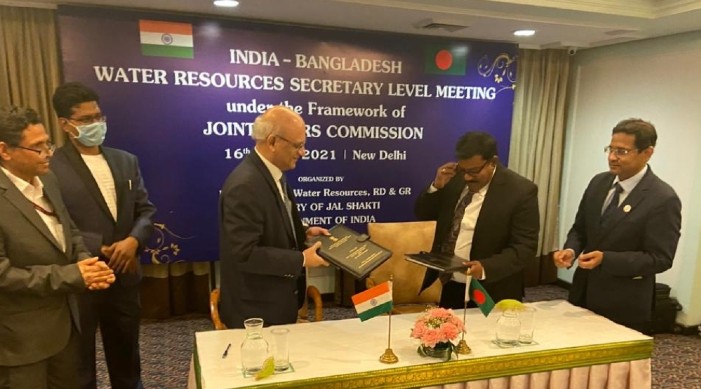 The India-Bangladesh Water Resources Secretary-level meeting was held on Tuesday.

Leveraging the robust mechanism in place to address water issues between India and Bangladesh at different levels, the two countries have agreed to expand cooperation across the entire gamut of water resources.

The India-Bangladesh Water Resources Secretary level meeting under the framework of the Joint Rivers Commission took place on Tuesday in New Delhi, a statement from the Indian Ministry of Jal Shakti said today.

According to the statement, both sides agreed to expand cooperation across the entire gamut of water resources issues including framework for sharing of river waters, mitigation of pollution, river bank protection, flood management, basin management etc.

A Joint Technical Working Group will provide inputs on the matter.

Moreover, the discussions held on Tuesday were substantive and held in a cordial atmosphere, it said.

Both sides agreed to schedule the next meeting at Secretary level under JRC framework at Dhaka at mutually convenient dates, the release informed.

India and Bangladesh have a robust mechanism in place to address water issues at different levels. An Indo-Bangladesh Joint Rivers Commission (JRC) is functioning since 1972. It was established with a view to maintain liaison in order to ensure the most effective joint effort in maximising the benefits from common river systems.

Meanwhile, reports in Bangladesh media said their country emphasised signing of interim water sharing agreement of the Teesta River as agreed by Bangladesh and India in 2011.

For the betterment of millions of people of the two countries, Bangladesh stressed upon the sharing of water of six trans-boundary rivers – Manu, Muhuri, Khowai, Gumti, Dharla and Dudhkumar. It also called for conducting feasibility study jointly for optimum utilization of the water received by Bangladesh under the provisions of Ganges Water Sharing Treaty, 1996.

The Bangladesh delegation also expressed the hope that the Indian minister of Jal Shakti would visit Bangladesh this year for the 38th meeting of the joint rivers commission (JRC) at the invitation of Bangladesh minister of state for Water Resources.

Bangladesh is celebrating the birth centenary of Bangabandhu Sheikh Mujibur Rahman, 50 Years of Bangladesh’s Independence, and establishment of diplomatic relations between Bangladesh and India. Indian Prime Minister Narendra Modi will visit Dhaka on 26-27 March to participate in the celebrations.