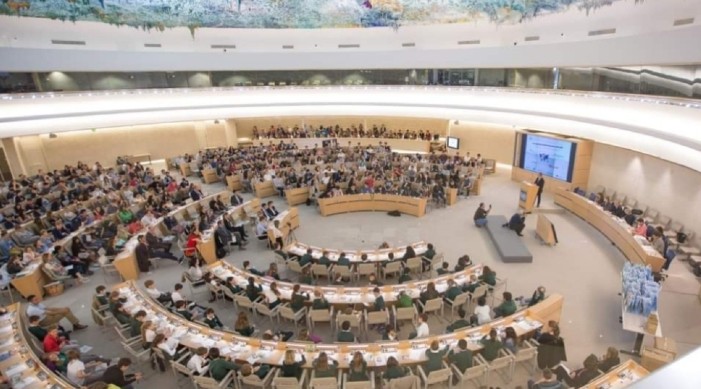 Exercising the right of reply in response to the incessant misuse of UNHRC by Pakistan, First Secretary, Permanent Mission of India to UN Pawankumar Badhe said, “It is high time that Pakistan, which continues to export terrorism, is held accountable for its state-sponsored and supported grave violation of human rights of its people. It is high time that the failed state of Pakistan stops preaching and focuses on its responsibility towards the millions suffering in Pakistan."

The statement was in response to what India said was the incessant misuse of the council by Pakistan for its fallacious and malicious propaganda against the country.

Delivering India's response, Badhe stressed that political and human rights activists continue to be targeted and charged under draconian laws in Pakistan, including under the anti-terrorism act.

He highlighted the case of Gulalai Ismail, a woman human rights defender, who campaigned against violence against women and enforced disappearances. She was charged with sedition, terrorism and defamation and had to flee from Pakistan; her father Muhammad Ismail has been arrested on "terror" charges recently.

"As highlighted by various SRs and Civil Society Organizations, this Council must pay urgent attention to Pakistan's deplorable human rights records and discriminatory treatment of its ethnic and religious minorities," he said.

India has also raised the issue of enforced disappearance, saying Balochistan has now come to be known as the ''land of the disappeared''.

"According to victim groups, tens of thousands of persons have disappeared from Balochistan since the year 2000. Families of persons who have disappeared continue to struggle for their voices to be heard. Hundreds of supporters of these families held a 10-day sit-in protest in Islamabad last month," the secretary said.

The ordinance gives security agencies vast abusive powers, including the power to detain people without trial or charge on vaguely defined grounds.

Mentioning the case of a 12-year-old girl who was abducted, chained in a cattle pen and forced to marry her abductor, India asserted that there has been systematic discrimination and persecution faced by Christian, Hindus and other minorities in Pakistan.

India also raised the issue of the killing of 11 coal miners of the minority Shia Hazara community in January in Pakistan.

"In September 2020, over 30,000 people gathered in Karachi, demanding that Shia Muslims be declared heretics and ''blasphemers'' and calling for their beheading. The killing of 11 coal miners of the Shia Hazara community, in January this year, is the latest in the series of acts of violence against the Shia community to which they have been subjected in Pakistan," Badhe said