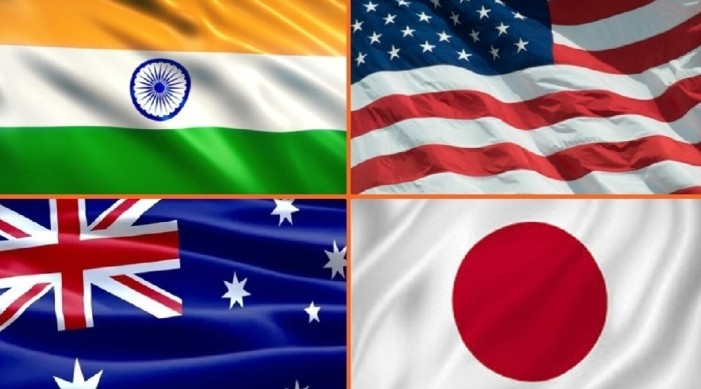 The first Quad leaders summit was held in a virtual format on Friday.

China’s aggression has managed to propel this group back together and given it a new sense of purpose, writes Harsh V Pant in an article for Mint

Last week's summit of Quad leaders from India, the US, Australia, and Japan has the potential of being "truly historic in nature," says Harsh V Pant in an article for Mint.

"For a platform that was struggling to gain traction even till last year, the momentum it has gained in recent months has been nothing short of dramatic," Pant, Professional in International Relations at King's College, London, points out in his Opinion piece.

Noting that the first virtual summit "lived up to expectations," he says the joint statement, 'The Spirit of the Quad’, committed the four members “to promoting a free, open rules-based order, rooted in international law, to advance security and prosperity and counter threats to both in the Indo-Pacific and beyond".

The statement also spoke about supporting “the rule of law, freedom of navigation and overflight, peaceful resolution of disputes, democratic values, and territorial integrity."

According to Pant, not only was this the first joint statement ever issued in the Quad context, the mix of values it espouses also made it very clear who the target was.

Referring to the "expansive" agenda of the summit, he points out that maritime security retained its centrality as the Quad underscored the need to “prioritise the role of international law in the maritime domain, particularly as reflected in the United Nations Convention on the Law of the Sea (UNCLOS), and facilitate collaboration, including in maritime security, to meet challenges to the rules-based maritime order in the East and South China Sea."

He adds that Quad members also seem ready to work with other regional stakeholders, including ASEAN members as well as European countries, to work towards regional peace, security and prosperity.

"That China’s aggression has managed to propel this group back together and given it a new sense of purpose is the story of how badly Chinese President Xi Jinping has played his cards on the global stage," Harsh V Pant says.