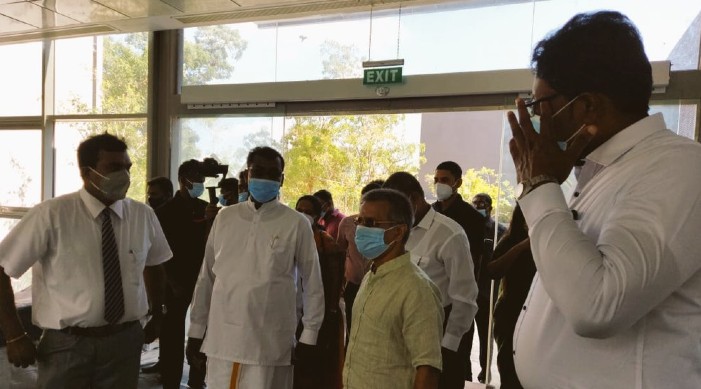 The Indian envoy has emphasized on cultural, civilisational and commercial connectivity between the two countries

India’s High Commissioner to Sri Lanka, Gopal Baglay on his four-day visit to the Northern and the Eastern provinces, beginning from Friday, laid emphasis on connectivity in a holistic sense of the term where cultural, civilization, commercial and contemporary dimensions of connectivity were highlighted.

He visited the Northern Province’s Kankesanthurai (KKS) harbour and took stock of the project to rehabilitate it with the Government of India’s assistance of USD 45.27 million. When completed, the project will enable movement of goods and ferry from Kankesanthurai to India.

The High Commissioner visited Palaly airport and reviewed arrangements for the resumption of international flights between Jaffna and Chennai and also discussed expansion of the infrastructure at the airport in view of existing and growing requirements to enhance air connectivity with India.

He also mulled over promotion of trade, such as Sri Lanka’s exports to India and through India to other destinations through the Palaly airport.

In his meeting with businesspersons, Baglay discussed promoting investment from India in infrastructure, energy and manufacturing, skills development, agriculture and food processing, fisheries and tourism.

He reiterated India’s readiness to support mutually beneficial initiatives and emphasized that enhancing sea and air connectivity, through development of the KKS Harbour and expansion of the Palaly airport will bring greater economic benefits and prosperity to the region.

The High Commissioner also visited the Jaffna Cultural Centre, an iconic landmark built under India’s grant assistance. The towering building, whose design celebrates close architectural and cultural links with India, is intended to serve as a people-centric hub of cultural activities that reinforce civilization heritage and cross-strait ties.

India’s close connection and cooperation for development of human resources in Sri Lanka was brought out during a ceremony at Ramanathan College, Jaffna.

The High Commissioner stressed the central place of quality education -especially for girls and women - for inclusive development and ensuring social, economic and political justice and equality.

Solemn remembrance marked the ceremony at the Indian Peace Keeping Force memorial where High Commissioner, Security Forces Commander Major General Priyantha Perera, other senior Officers of Sri Lankan Army paid homage to the fallen heroes of India Army who embraced the supreme sacrifice for the cause of peace in Sri Lanka.

In a brief meeting thereafter at Security Forces Headquarters, Jaffna, the High Commissioner and the Special Forces Commander discussed the growing cooperation between Armed Forces of the two countries, which serves to enhance security in our shared region and is marked by camaraderie.

The High Commissioner also held a series of meetings with leaders of various political parties in Jaffna and Trincomalee on Saturday, the third day of his visit to the Northern and Eastern Provinces.