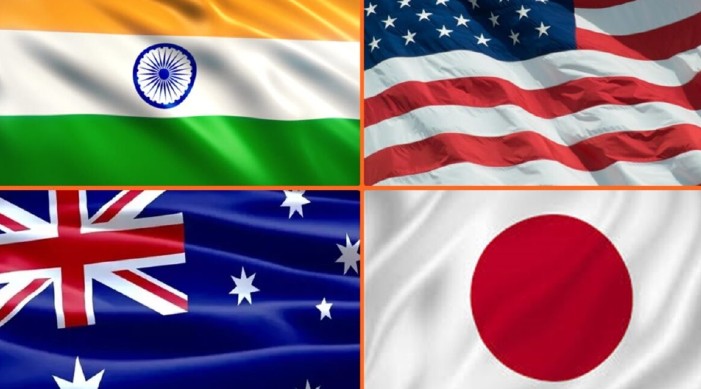 Flags of India, Japan, Australia and the US(Image for representational purpose)

The first in-person Quad meeting is likely to take place on the sidelines of the G7 summit which will take place in the United Kingdom from 11-13 June, a report in Wion stated.

UK Prime Minister, Boris Johnson, who is the chair of the grouping for 2021, has invited India’s Prime Minister Narendra Modi and Australian Prime Minister Scott Morrison to the G7 summit that is to be held in Carbis Bay, Cornwall in June, the report said.

G7 will be for the first-time leaders of all these countries will be together physically. While the UK could oversee the Quad meet, the US is keen on hosting the first in-person meet as well, the report mentioned.

The Quad has US President Joe Biden, India's PM Narendra Modi, Australian PM Scott Morrison and Japan's PM Yoshihide Suga as its members. On March 12, the bloc for the first time met at the leadership level in the virtual format.

The first Quad Leader’s meet saw the announcement of the Quad Covid Vaccine initiative, focussed on the large number of one billion Covid-19 vaccine doses.

The US and Japan will contribute to the funding to expand India’s manufacturing capacity, while Australia would provide the logistical support to strengthen access and ‘last-mile’ vaccine delivery in Southeast Asia and the Pacific.

The leaders also agreed on the creation of 3 new working groups. The first one will consist of vaccine experts to devise the implementation plan, followed by two other working groups on climate change, and critical and emerging technology.

They reaffirmed their commitment to quadrilateral cooperation between Australia, India, Japan, and the United States, bringing diverse perspectives and are united in a shared vision for the free and open Indo-Pacific.

The leaders of the four countries reiterated their resolve to strive for an Indo-Pacific region that is free, open, inclusive, healthy, anchored by democratic values, and unconstrained by coercion, it added.