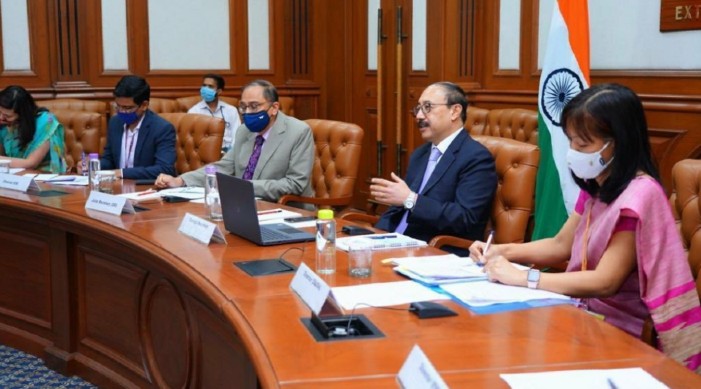 The vaccine initiative 'is the most pressing and valuable', Foreign Secretary Harsh Vardhan Shringla said after the Quad leaders summit

India is set to manufacture US COVID-19 vaccines with finance from the US and Japan and logistical support from Australia.

This is part of the landmark COVID-19 vaccination partnership finalized at the first Quad leaders summit held virtually on Friday.

Foreign Secretary Harsh Vardhan Shringla said that the vaccine initiative "is the most pressing and valuable" among the concrete takeaways of the first summit meeting of Quad leaders.

Addressing a press conference after the Quad summit meeting, Shringla said, "Quad Vaccine initiative is the most valuable. Four countries have agreed to pool their financial resources, manufacturing capabilities and capacities, logistics to ramp up the manufacture and distribution of COVID19 vaccines in the Indo-Pacific region."

"India welcomes this initiative as it recognises our own manufacturing capacities and capabilities. We look forward to wholehearted participation in this endeavour. This vaccine supply chain is built by trust and being built to convey trust," Shringla added.

He confirmed that US COVID-19 vaccines will be manufactured in India, adding that they would be financed by the US and Japan with logistical support from Australia.

Speaking at a media briefing, he said: "US vaccines will be manufactured in India. India's manufacturing capabilities and capacities have been recognised in this regard. Each of the other three Quad leaders made it a point to talk about the Vaccine Maitri programme, our endeavour to supply vaccines all over the world despite our own requirements. I think this is being seen as an important initiative to address COVID-19 and put the pandemic behind us."

Shringla further stressed that India's manufacturing capacity is going to be leveraged to create US vaccines, which would be financed by the US and Japan.

"You'll have Australia contributing for last-mile and logistical delivery issues. In other words, Australia will also finance countries that are going to receive these vaccines," he added.

The Foreign Secretary also disclosed an ambitious target of producing a billion COVID-19 vaccines by the end of 2022.

"We are talking about producing a billion doses of vaccines by the end of 2022. It is an ambitious target. If you look at the fact that vaccines all over the world are limited to a few hundred million, a billion is a fairly large number. This is both an ambitious and much-needed initiative that the Quad is undertaking," he said.

During the Quad meeting, future pandemics were also discussed and how the group will deal with them.

"We will work together, closer than ever before, for advancing shared values and promoting a secure, stable and prosperous Indo-Pacific," the Indian Prime Minister said while addressing the opening remarks of the virtual summit.

He said he saw this positive vision as "an extension of India's ancient philosophy of Vasudhaiva Kutumbakam, which regards the world as one family".