India Strongly Committed To Cause of Global Food Security: Envoy to UN 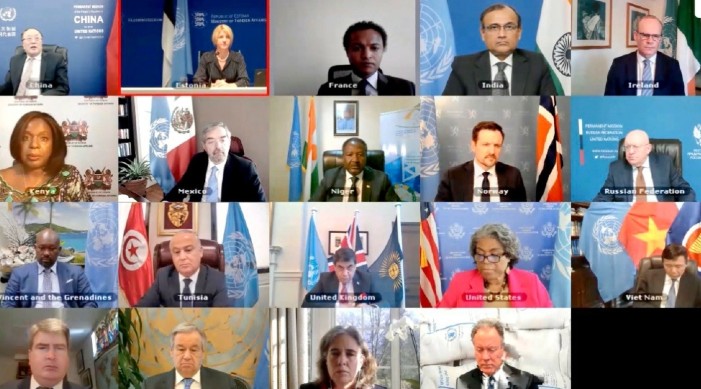 Participants at the UNSC open debate on Conflict and Food Security.

India has provided thousands of metric tonnes of wheat, rice, pulses and lentils to several countries

Food security is the basic minimum required particularly as the world deals with the devastating COVID19 crisis, India’s Permanent Representative to the United Nations TS Tirumurti said on Thursday, adding that the increasing tendency to politicize humanitarian situations is unfortunate.

Tirumurti quoted Mahatma Gandhi who has said: "There are people in the world so hungry, that God cannot appear to them except in the form of bread".

Speaking at the UNSC open debate on 'Conflict and Food Security', he said, nations must resist linking developmental aid with progress in the political process as this will only enhance food insecurity in conflict situations.

"While all humanitarian action must be primarily guided by the principles of humanity, neutrality, impartiality and independence, we are unfortunately witnessing an increasing tendency to politicise humanitarian situations," he said.
"Such a position by donors will only enhance food insecurity in conflict situations," he added.

Tirumurti noted India is strongly committed to the cause of global food security, reiterating that the country has always stepped forward to extend aid amounting to millions of tonnes of food grains to several vulnerable countries across the world.

Tirumurti said, “India remains strongly committed to the cause of global food security and has over the last several years contributed to UN’s Central Emergency Response Fund (CERF) and the UNOCHA in response to several humanitarian crises. Further, India has always stepped forward to extend aid amounting to millions of tonnes of food grains to several vulnerable countries across the world. In 2019 alone, the WFP sourced approximately 11,000 metric tons of pulses, sorghum, wheat, and rice from India to assist vulnerable populations.”

The Indian envoy pointed out that India has provided food aid in the form of thousands of metric tonnes of wheat, rice, pulses and lentils to several countries across the world, including Myanmar, Maldives, Afghanistan, Djibouti, Eritrea, Lebanon, Malawi, Sierra Leone, Sudan, South Sudan, Zambia, Zimbabwe and many others, to strengthen their food security in these challenging times.

Last month, India gifted 2,000 MT of rice to strengthen food security in Syria and a ship is currently enroute from India to deliver 1000 MT of food aid each to Madagascar and Comoros.

“We remain committed to providing assistance to all vulnerable countries to support them in their quest for food security. Our spearheading the resolution for declaring 2023 as the International Year of Millets is in this direction. We are equally committed to provide vaccines to the world so that we tackle Covid and food insecurity at the same time,” he added.