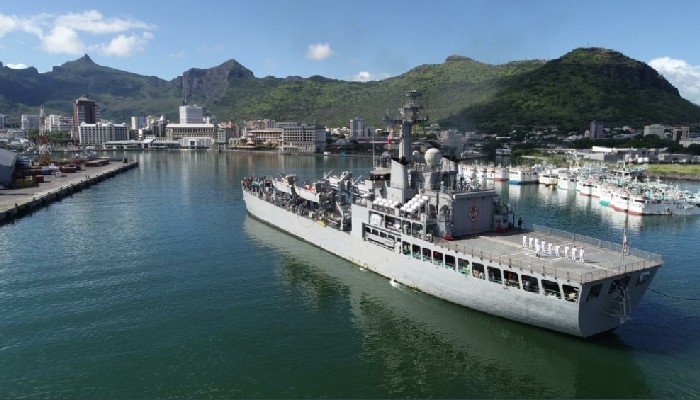 INS Shardul, a ship of the First Training Squadron of the Indian Navy, is visiting Port Louis, Mauritius from 10 to 13 March to strengthen bilateral ties and enhance maritime security cooperation between the two countries.

Part of an overseas deployment to Southern Indian Ocean nations, the ship will undertake Exclusive Economic Zone (EEZ) surveillance of Mauritius, in coordination with Mauritian National Coast Guard as part of the deployment, a Ministry of Defence statement said.

The naval ship will also participate in the National Day celebrations of Mauritius on 12 March during its port of call.

Adhering strictly to Covid-19 sanitary protocols, INS Shardul will remain at port without participating in any events.

Indigenously built at Garden Reach Shipbuilders and Engineers (GRSE) Kolkata and commissioned in the Indian Navy in 2007, INS Shardul is an amphibious warfare ship capable of carrying battle tanks, troops and an integral helicopter.

The ship has also played an important role in Humanitarian Assistance and Disaster Relief (HADR) operations in the recent past, the defence ministry pointed out.

Notable among these include delivery of 600 tons of food grains to drought-hit Madagascar in March 2020 and operation Samudra Setu for evacuation of overseas Indians in June 2020 during the COVID-19 pandemic.

Mauritius is amongst India’s key maritime neighbors in the Indian Ocean Region and occupies a special place in Prime Minister Narendra Modi’s vision of ‘SAGAR’ (Security and Growth for All in the Region).

External Affairs Minister S Jaishankar’s visit to the country last month was testimony to the importance that India attaches to its close and friendly relations with Mauritius.

New Delhi extended a special US$ 100 million Defence Line of Credit to Mauritius that will enable the procurement of defence assets from India.

The EAM also signed an agreement for providing a Dornier aircraft and an Advanced Light Helicopter (ALH) Dhruv on lease to Mauritius on gratis basis for 2 years, helping shore up its capabilities to patrol and monitor its extensive maritime domain more effectively.
Attachments area