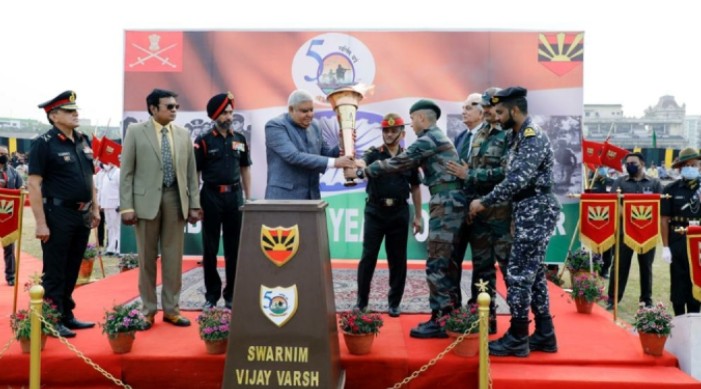 A spectacular fly past and air show by Sukhoi Su-30 fighter aircraft, showcasing the might and joint-manship of the Indian defence forces was on display in Kolkata on Wednesday.

One of the four victory torches symbolizing India’s triumph over Pakistan in the 1971 war, sent around the country by Prime Minister Narendra Modi on 16 December last year, reached Kolkata from Ranchi via Panagarh on 9 March.

GOC-in-C, Head Quarters, Eastern Command, Lieutenant General Anil Chauhan was amongst those present at the ceremony marking the event.

Events commemorating the arrival of the Victory Flame at the Head Quarters Eastern Command included a state-of-the-art display covering wide array of weapons and equipment of the Indian armed forces.

Commandant Jayant Thorat of the Indian Coast Guard said that the enclosure was exhibited focusing upon the theme of search and rescue duty to mark the 50th anniversary of the victory in the 1971 war.

The enclosure explains the role of the coast guard in saving the mariners at sea and equipments related to that have been displayed, he added.