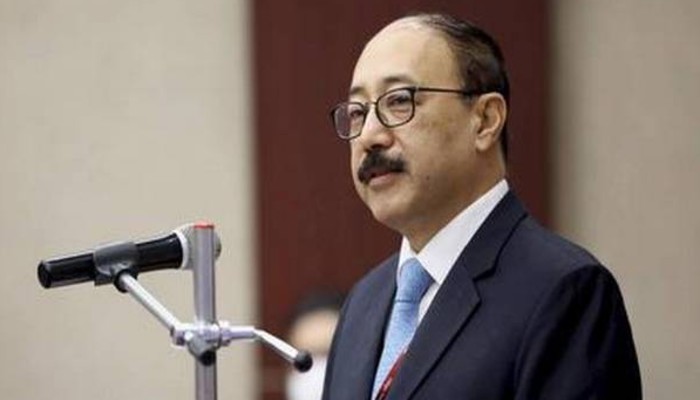 Huge amount of energy will be required to make the sub-region developed one, said FS Shringla

Foreign Secretary Harsh Vardhan Shringla on Wednesday said efforts are on to promote the sub-region comprising India, Bhutan, Bangladesh, Nepal and Myanmar as an energy hub.

“Be it conventional sources, hydropower, solar, wind or even petroleum products, India is taking the lead to promote a regional approach to our energy needs. Being the largest producer and consumer of energy in the region, it is natural for us to be the epicenter for any energy initiative in the region. We have to make energy affordable, accessible and clean,” Foreign Secretary Shringla said in his remarks at the inauguration of the South Asia Group on energy at RIS on Wednesday.

He said energy connectivity is one of the most dynamic sectors of cooperation in India’s relationship with Bangladesh.

“Our cooperation in hydrocarbons’ sector is diversifying into the entire value chain of the oil and gas sector. The bilateral hydrocarbon trade was US $ 337.3 million in 2019-20 (US $ 322.32 million from April-November 2020),” he said.

“We are constructing the India-Bangladesh Friendship Pipeline from Siliguri to Parbatipur in Bangladesh for supply of high speed diesel. Our PSUs (OVL & OIL) have invested nearly US$ 24.26 million in two shallow water blocks (SS04 & SS09) in Bangladesh,” Shringla said.

In October 2019, Prime Ministers of India and Bangladesh jointly inaugurated the project to import bulk LPG from Bangladesh.

“This project increases bilateral trade and ensures sustained and affordable supply of LPG to the North Eastern region of India, which is supplied from Chattogram in Bangladesh by trucks to Tripura,” the Foreign Secretary informed.

A joint venture has been formed between IOCL and Beximco (The Bangladesh Export Import Company Limited) in June 2020 to further expand its downstream business in Bangladesh and other countries.

A proposal for supplying R-LNG through a cross-border pipeline and establishment of a LNG terminal is also being explored.

On the issue of cooperation to Bangladesh on the electricity front, the Foreign Secretary said there has been notable success in these efforts. With Bangladesh, 1160 MW of power is currently supplied by India through the two existing interconnections.

“We are in discussion regarding the construction of a 765kV power interconnection through Katihar in India via Parbatipur in Bangladesh to Bornagar in India, which when constructed, will reinforce interconnection of grids in the region,” he said.

He also informed that India has provided concessional credit to Bangladesh for constructing transmission lines as well as power evacuation facilities from the upcoming Rooppur Nuclear Plant in Bangladesh.

“We are constructing the 1320 MW Maitree Super Thermal Power Project at Rampal in Bangladesh, with Unit 1 to be commissioned in November 2021 and Unit 2 in March 2022,” Foreign Secretary Shringla added.

Adani Power Ltd signed a MoU with Bangladesh Power Development Board in November 2017 for supply of power to Bangladesh from a 1600 MW coal based plant which is being constructed in Godda, Jharkhand.

L&T have commissioned 225 MW at Sikalbaha (near Chittagong), and the 360 MW project at Bheramara (Kushtia District, Khulna Division), reiterating the growth and potential of this area.

With regard to Nepal, he said, “We are promoting easier movement of hydrocarbons across the region. South Asia’s first cross-border petroleum products pipeline from Motihari in India to Amlekhgunj in Nepal was remotely inaugurated by the two Prime Ministers in September 2019.”

“This has since led to savings of INR 1 billion for Nepal Oil Corporation. We are now looking to expand this project to Chitwan, and also construct a new pipeline connecting Siliguri and Jhapa in Nepal,” he added.

“With Myanmar we enjoy a robust and expanding partnership in the area of energy cooperation. Myanmar is potentially an important partner in the energy sector as future offshore gas finds can be piped to India,” the Foreign Secretary maintained.

With investments of over US$1.2 billion, Myanmar has the highest Indian investment in any country in South East Asia in this sector.

The institutional mechanism for cooperation is the JWG on Oil and Gas headed at the Secretary level. The bilateral cooperation received further boost during the visit of the President of Myanmar to India in February 2020 when both sides signed a MOU for cooperation in the field of petroleum products which promote cooperation in refining, stockpiling, blending and retail, among other areas.

Indian PSU's, ONGC Videsh Limited (OVL), Indian Oil Corporation Limited (IOCL) and GAIL are active in the upstream and midstream sector in the oil and gas sphere in Myanmar.

IGL & GAIL consortium has participated in expression of interest for natural gas supply and distribution to the New Yangon Development Company Ltd. in respect of the New Yangon City project.

Indian private sector players are also active in Myanmar. Both countries are exploring cooperation in the renewable energy sector. Myanmar has also recently ratified the amendment to the Framework Agreement of the International Solar Alliance (ISA).

As regarding Sri Lanka, India is pursuing several projects in the energy sector, such as the establishment of a LNG-based power plant at Kerawalapitiya in Sri Lanka with an initial capacity of 300 MW.

There is strong potential for collaboration in harnessing wind energy in Mannar region. India has also offered a US$ 100 million Line of Credit for the development of solar power projects, which will help massively scale-up solar power production and deployment in Sri Lanka.

India’s cooperation with Sri Lanka on the development of the Oil Tank Farm in Trincomalee is a mutually beneficial proposition that promises to assist Sri Lanka in building petroleum reserves and address supply and price volatility, the Foreign Secretary added.